Budapest (AFP) – The two-week World Aquatic Championships ended with China making its biggest splash in diving, but the lasting ripples will spread from a decision on transgender athletes announced on the opening weekend.

When Yang Jian fought back from an early deficit to win the men’s 10m platform gold on Sunday night, he completed a Chinese sweep of the 13 diving events.

“It’s pressure,” said Yang after his win. “But I made it. I withstood the pressure.”

That’s one better than in 2019, when China did not enter the mixed synchronised 3m springboard, a non-Olympic event, but won the other 12 golds. This time Lin Shan and Zhu Zifeng won the mixed.

In the 2011 World Championships, before mixed events, China won all ten diving events. They have never completed an Olympic sweep, winning seven of eight golds in 2016, and 2021.

It was Spain’s first gold of the competition, for Italy it was a 22nd medal.

They took third in the overall medal table from the banned Russians.

In 2019, the Americans won 36 total medals, 15 of them gold, while China collected six fewer total medals but one more gold.

This time the two countries tied with 18 golds, but the US, who won 17 golds in swimming and one in women’s water polo, won 49 altogether, 21 more than the Chinese, who also topped the artistic swimming with four golds and won one in swimming.

Governing body FINA calculated on Sunday that more than 2,000 athletes from 180 countries competed across the five disciplines.

Their pride that 130,000 came to watch over the 15 days of competition in four venues puts the popularity of swimming and diving as spectator sports in context.

The disrupted swimming schedule, with two Olympics in three years and these championships tacked on to the normal FINA scheduled, led several Tokyo gold medallists to skip Budapest.

Nevertheless, there were three world records in the swimming, set by Italian Thomas Ceccon in the men’s 100m backstroke in 51.60 seconds, Kristof Milak, the host’s lone gold medallist, in the men’s 200m butterfly and Australia in the mixed freestyle relay, which is not an Olympic event.

Amid the sporting triumphs, the most shocking moment came when American artistic swimmer Anita Alvarez passed out at the end of her solo routine. Her coach Andrea Fuentes leapt in fully clothed and pulled the unconscious swimmer off the bottom of the pool.

“I think she was at least two minutes without breathing because her lungs were full of water,” said Fuentes,

FINA decided not to allow Alvarez compete again in Budapest.

The two weeks began with FINA making a dramatic announcement in a football stadium.

At an Extraordinary General Congress, at the Puskas Arena, on June 19, FINA said it would be creating an ‘open category’ for transgender athletes, as part of a new policy which will effectively ban them from women’s competition.

FINA officials acknowledged that the decision involved choosing who to disadvantage.

“This policy means certain individuals may not be able to compete in the category that best aligns with their legal gender, gender identity or gender expression,” said Brent Nowicki, FINA’s CEO.

A special FINA medical panel argued that athletes who have experienced some male puberty retain “structural” physical advantages even after transitioning.

Note: This news piece was originally published in rfi.com and used purely for non-profit/non-commercial purposes exclusively for Human Rights. 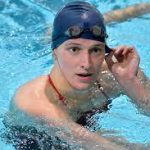