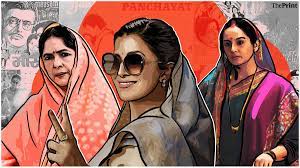 From Maharani to Dasvi, the Hindi entertainment industry has released a spate of sub-par films depicting women politicians—portrayals that still promote politics as a male bastion and women trying to catch up. What’s common in all of them? They treat women politicians as placeholders or substitutes and rarely as first choices. The irony is, our best political movies with women at the forefront were only born during the darkest chapter in Indian democracy—the 1975 Emergency.

Art is a mirror of life. Take India’s performance in the World Economic Forum’s 2021 Global Gender Gap Report. It stumbled by 28 positions to rank 140th among 156 countries, becoming the third-worst performer in South Asia. As per Deutsche Welle, “Most of this decline occurred in the area of political empowerment where India regressed considerably, observing a significant drop in the number of women ministers in recent years — from 23.1 per cent in 2019 to 9.1 per cent in 2021.”

Massive rise in ‘placeholder’ depictions
One may argue that lots of OTT content sports women politicians. Yes, but look at their rise to power first — inorganic, often not democratic. They are usually portrayed as the wives who took over an empty throne when the shots are still being called by their husbands — even from jail.

In Tushar Jalota’s Dasvi, Nimrat Kaur plays the role of Bimla Devi, a politician’s scheming wife. While Bimla shows considerable political ambition, she only comes to the fore once her chief minister husband, Ganga Ram Chaudhary (Abhishek Bachchan), is sentenced to jail on corruption charges. It is refreshing to see Bimla find her voice as interim CM, but again, she is used as an accessory in propelling a narrative about a man who finally realises the importance of high-school education. But Jalota justifies his stance to Firstpost, stating that “Bimla is subservient and doesn’t have a voice in front of him (Abhishek Bachchan) …(but) it’s all done in a very light-hearted manner.” He also says that “While it is a take on politics, the film is mainly on education.”

Let’s also consider Deepak Kumar Mishra’s web series Panchayat 2, a hot favourite on Amazon Prime Video. While it does a great job of exploring the nitty-gritties of rural life in North India, the portrayal of village head Manju Devi (Neena Gupta) remains lopsided and stilted. While the audience expects her to take her duties as ‘Pradhan’ seriously, Manju is seen happily tending to her cows, domestic chores, and serving her husband. Although writer Chandan Kumar light-heartedly exposes the realities of grassroots politics, he makes no major changes to Manju’s character despite many promises in season one. However, Neena Gupta begs to differ. “Manju Devi’s growth as a character will be slow because the kind of woman she is, she won’t suddenly change. She is a very simple woman and doesn’t want much from life. So, the change has to come softly and slowly. And this is the flavour of Panchayat. There are no abrupt shifts. The script flows smoothly,” Gupta said in an interview with PTI.

Huma Qureshi’s Maharani and OTT darling Mirzapur also have women emerging from the shadows of powerful husbands with no control over the story.

While one could mock filmmakers for their archetypical portrayals, placeholders have been a common sight in Indian politics. In an interview with Deutsche Welle, A. Priyadarshani, Chennai’s youngest city councillor, says that even today, “most women contest as ‘namesakes’ for their husbands”. In the 2021 local body elections, where she participated, Priyadarshani observed that most women weren’t willing participants. Power-hungry husbands allowed them to contest only because a 50 per cent quota for women had been announced earlier.

Up north, Samajwadi Party MLA Dimple Yadav is a prime example. Despite her success in the political arena, Yadav makes sure that it is her husband, former Uttar Pradesh chief minister Akhilesh Yadav, who gets the lion’s share of the limelight. In fact, she only won her Kannauj Lok Sabha seat in 2012 after her husband vacated it to become CM—an attempt by the Yadavs to keep a key constituency within the family.

Poorly-made films try to change the narrative
Some directors have attempted to change the script in some movies, but they are poorly made. Subhash Kapoor’s Madam Chief Minister (2021) is one. Supposedly inspired by the life of Bahujan Samaj Party supremo Mayawati, this film tracks a Dalit woman’s exponential rise to power. It is interesting to see how Tara (Richa Chadha) navigates through the exploits of the caste system to find love, dignity, and power. But unfortunately, while the film has all the makings of a slow-burn political thriller, its radical ideas amount to nothing. Not to mention the controversial poster that showed Tara holding a broom — something several Dalit activists called out and criticised. Richa Chadha apologised for it later

A.L. Vijay’s Thalaivi (2021), too, comes to mind, but its writing has failed it to the extent where it best remains forgotten. The dialogues don’t work, and lead actor Kangana Ranaut is awkward playing J. Jayalalithaa.

However, it seems that these films remain ‘attempts’ for a reason. For starters, none of them have been directed by women or include a prominent female voice. They want to cater to a ‘woke’ audience—one that is aware and tired of regurgitated tropes. Yet, they focus more on appearance and promotions and less on the story.

Only Sanjay Leela Bhansali’s Gangubai Kathiawadi (2022) deserves special mention for succeeding in highlighting the achievements of its protagonist—political and otherwise. It is refreshing to see how Gangu (Alia Bhatt) is ready to relinquish love for power—not just for the sake of her community but also for herself.

A golden past
Today’s Hindi movies might be a disappointing lot, but hark back to the mid-1970s, and you’ll find undiscovered gems. These were films that shook not just an autocratic government but also an entire generation of Indians. Unique, women-centric stories like Gulzar’s Aandhi (1975) and Amrit Nahata’s Kissa Kursi Ka (1975) bothered the Gandhis to the extent that they did not allow the films a proper release until the Janata Party government came to power in 1978.

Aandhi was one of the few films that saw a woman in a position of power—Aarti (Suchitra Sen), who prioritised her political career above love, family, and all else — a likely model of Indira Gandhi. Much like his other films Mausam (1975) and Ijazat (1987), Gulzar uses flashback mode to portray the human side of his otherwise rock-solid central character. Aarti isn’t an ideal multi-tasking Indian woman who can effortlessly juggle the pressures of duty and love—a message conveyed without villainising her and a feat only a seasoned writer like Gulzar could have accomplished.

Amrit Nahata’s Kissa Kursi Ka, starring veteran actors Surekha Sikri and Shabana Azmi, stirred a controversy when it was released. While all of the film’s negatives were allegedly destroyed by Sanjay Gandhi, its remnants can still be found intact on YouTube. Both Sikri and Azmi’s characters use theatre, metaphor and comedy to depict the dark side of Indian politics and expose the harsh realities of empty manifestos, government schemes and party campaigns. They aren’t mere accessories in a plot that doesn’t revolve around them. Instead, their contribution helps bring the story together.

Despite brutal oppression during the Emergency, it is intriguing to see how our best political films, with women as noteworthy leads, only came when India had a female prime minister at its helm. But unfortunately, it looks like that agency is waning as more men come to power and times ‘progress’.

Be it the 1970s or the 2020s, most films depicting women politicians ceased to live on in popular imagination. Some were commercial failures, while others were victims of a lacklustre script. Perhaps this is a reflection of a society that refuses to take its women seriously—especially those in power. 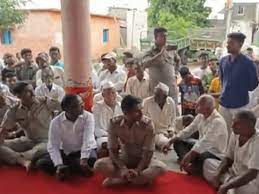 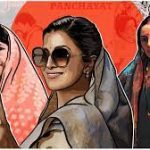