Mamata Banerjee also took a jibe at BJP leaders eating food with Dalit families while visiting West Bengal, saying she would ask her party workers to pay money to those hosting them.

West Bengal chief minister Mamata Banerjee on Tuesday accused the opposition Bharatiya Janata Party (BJP) of disturbing the meetings held by her Trinamool Congress (TMC) and warned she will do the same.

“I have been seeing for a few days that some people are being sent by the BJP to create disturbance in our meeting. Now, I will send some people to disturb BJP, CPM meetings,” Banerjee said at a rally in Purulia, according to news agency ANI.

Banerjee also took a jibe at BJP leaders eating food with Dalit families while visiting West Bengal, saying she would ask her party workers to pay money to those hosting them. “A Dalit family said we fed them (BJP leaders) from our pocket, how can we pay the amount? I will tell my workers that when you see something like that, then pay them,” she said, according to ANI.

BJP leader and union home minister Amit Shah had lunch with a tribal family in a remote village in Birbhum district during his two-day visit to West Bengal in December last year. The lunch for Shah was hosted by folk singer Basudeb Das Baul on December 20.

Assembly elections are scheduled to be held in West Bengal in April-May this year. Banerjee, who has been the chief minister since 2011, is looking at a third consecutive five-year term in office but faces a stiff challenge from a resurgent BJP, which aims to form its first government in the state. A host of TMC leaders, including heavyweight Suvendu Adhikari, have jumped ship to the BJP in recent days.

On Sunday, Banerjee announced she will contest the upcoming elections from Nandigram, as well as Bhawanipore. From Nandigram, she will be up against Adhikari, who has announced he would leave politics if “I cannot defeat her by 50,000 votes.” 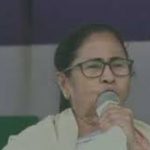