‘We are scared to even raise our voice’: Delhi sewer workers tell roundtable

A roundtable attended by more than 100 sewer workers in Delhi, saw sharp voices against the contract system, poor wages and lack of any social benefits. Organised by the Dalit Adivasi Shakti Adhikar Manch (DASAM), which has refused to reveal the identity of the sewer workers who spoke on the occasion for fear of retaliation from the authorities, saw workers complain that have been working for more than 10 years, hoping that someday they would be made permanent.

Said a sewer worker, “We earn less than the minimum wage provided by the government and do not receive any benefits from the government”, adding, “If someone in our family gets sick, we have nowhere to go for treatment. We are deprived of the Employees’ State Insurance (ESI) and the Provident Fund (PF), which are basic facilities.”

Another worker said, “The contractor wages for only four months, though they are hired for for six months”, adding, “We have to do odd jobs to sustain ourselves. After one contract ends, we have to worry if we would be hired again or not.”

Yet another worker said, “We are scared to even raise our voice against any injustice either by the contractor or the neighborhood we work in. A constant threat of losing our job looms on our heads. Injuries while opening the sewer is so common that we do not even count it as an injury, and after such injuries, we are left on our own to treat them.”

Addressing the sewer workers, Ashok Kumar, a senior DASAM activist, spoke about the exploitative contractual system, pointing out, DASAM had submitted a presentation in front of MLAs of Delhi for contractual sewer workers and urged them to raise their issues in Parliament”, regretting, however, nothing has happened thereafter.

Citing a survey conducted on socio-economic and working conditions of contractual sewer workers, he said, “The contractual workers receive no work permits or ID cards, which further adds to their problem, especially in the case of accident or death.” In fact, they have to “struggle to prove the worker died while engaged in sewer work.”

Noted Ena Zafar, another senior DASAM activist, they witnessed that, although outlawed, sewer workers face untouchability. Even when a worker asks for water from some household, he or she is outright denied or asked to “take away the bottle.”

Virender Goudh, president, Municipal Workers Lal Jhanda Union (affiliated with the Centre for Indian Trade Unions) spoke about the issues workers and unions have to face while getting approval for minimum wage. The announced benefit of minimum wage has not reached the workers. Workers continue to receive money below minimum wages as whatever amount is added, is taken over by the contractors.

Shashi Raj, deputy convenor, Delhi Democratic Alliance, said that despite the slight engagement of people in the sewer work from some other castes, majority of workers belong to the Dalit community, which is historically oppressed and is still being oppressed. Workers are crying for basic facility for risking their lives, but the authorities have refused to listen to them.

Note: This news piece was originally published in counterview.net and used purely for non-profit/non-commercial purposes exclusively for Human Rights objectives. 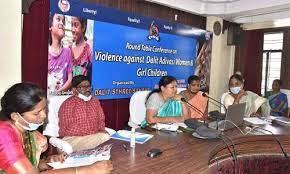 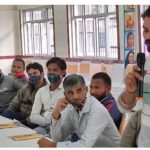 ‘We are scared to even raise our voice’: Delhi sewer workers tell roundtable