And when he is done, seers in dreadlocks and ash on forehead gather around him smiling, shake his hand, offer him money and garland him. Altaf Band is one of many all-Muslim music groups that keep devotional tunes going at the Maha Kumbh, the largest congregation for followers of the Hindu faith.

“Muslim bands have been a constant at Kumbh Melas. They play songs that touch the heart. God is one for all,” said Mahant Rishishwaranand from Udaseen Akhara, president of the Bharat Bandhu Samaj and head of Chetan Jyoti Ashram. It is a tradition deeply entrenched in the Kumbh culture.

Altaf Band itself is 100 years old. “Ours is one of the oldest bands in India. We have around 70 people with us, on drums, the guitar, bagpipes, flutes and vocals,” said Abdul Rehman, the fourth-generation owner of the band. “Our founder, Mohd Altaf, started the tradition of Muslims singing Hindu bhajans. We had also contributed over Rs 1 lakh to the defence funds during the 1971 India-Pakistan War. We are proud of it,” he said, adding that the receipt for that is still showcased at their office in Dehradun.

Has there ever been any resistance? “We are not Hindu or Muslim. We are artistes. We do our best to make the event a success,” said Master Faheem, who runs the 50-year-old Milap Band from Jwalapur, which has about 35 members, led by Mohd Mumtiyaz, Bhoora and Mohd Tanveer on vocals.

Behind the scenes is undying rigour. The bands, which come all the way from Saharanpur, Muzaffarnagar, Roorkee, Dehradun and Meerut, practise for at least six months before the Kumbh season begins. They buy bhajans — those about Shiva, Krishna and Hanuman are most popular — and keep listening first. Then they start singing and playing with the songs, and keep at it until it’s perfected.

Every season has its chart-topper. This time, Altaf Band is ready with ‘Nagar mein jogi aaya’, Milap Band is brushing up on ‘Hanuman tera naam jag mein sab se pyaara’, and Gulab Band from Haridwar is tuning up ‘Jag mein ooncha tera naam, mere Raam.’ “We started with Juna, Niranjani and Nirvani Akharas. Now, Atal Akhara is lined up for March 9. After all peshwais (grand processions) are done, we will give the team some rest for a couple of days, and then move to Kumbh from April 1 for the big season,” said Rehman.

And they all have quite a following. “People want selfies with us all the time. They offer us money, tell us they loved our playlist. But most of all, we get their blessings,” said Mohd Insaas, who runs Gulab Band. “What better way to make a living?” 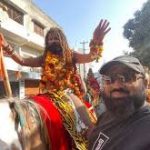