Police sources claim that the victim was thrashed over suspicion of theft, not his religion.

Several viral videos emerged from Khargone district of Madhya Pradesh on Saturday, 6 August, showing a Dalit man being assaulted by a group of people allegedly over suspicion of theft.

The man being thrashed has been identified as one Aditya Rokde and the incident is said to have happened on 3 August near Nimrani area of Khargone.

A case under Indian Penal Code sections of punishment for criminal intimidation, wrongful confinement, and sections of the Scheduled Castes and the Scheduled Tribes (Prevention of Atrocities) Act, 1989 has been registered after the incident came to light.

Talking to media, Dharmveer Singh Yadav, Superintendent of Police (SP), Khargone district said that the police got the information about the incident on 6 August and subsequently a case was registered.

“We were informed that a person (Aditya Rokde) was thrashed by some people in Nimrani village. We tracked his family down and a case has been registered against the accused.”

Yadav further said that an enquiry has been ordered against the officials who delayed actions after getting the information regarding Rokde being assaulted.

Rokde’s mother Bhagwati Rokde said that her son had gone to Khalghat for work and was attacked on his way back home. She alleged that her son was ‘stripped naked’ by the assailants to “check whether he was a Hindu or Muslim.”

“They beat my son, stripped him naked and checked whether he was Hindu or Muslim. The Police was present at the spot but did nothing to defend my son.”says Bhagwati Rokde, Mother of Aditya Rokde

Police sources, however, claim that Rokde was thrashed over suspicion of theft, not his religion. 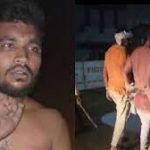