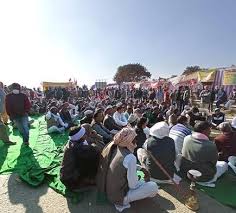 “Women’s participation has of course, been very prominent in the movement and many of the activists of the farmers’ unions seem to have become active against the background of the larger folding tragedy of Punjab – with Green revolution, followed large-scale indebtedness and suicides…”

The Central government is playing with fire – and along with it the Supreme Court of India. They had banked upon the ‘Modi magic’ or ‘Modi charisma’ to see them through this time as well, just as it had on earlier gambles like demonetization. The overconfidence that they can push through anything- even the most unpopular measure – by using a combination of the media-administered ‘nationalist potion’ and Modi’s ‘magic’, has led it to the corner it has painted itself into.

The situation is serious, as over 60 people have died and innumerable old people are still out there in the freezing cold. They have put their lives in danger, expecting the government to come out with the only solution that can save them, their livelihoods and their autonomy, namely the repeal of the laws. They aren’t prepared to go back home for the way they see it, it is better to die fighting than simply die the way the government wants them to.

However, the worst is yet to come – for the confrontation is bound to reach a flashpoint as 26 January draws closer and the farmers are forced into the desperate action of holding their proposed tractor rally by entering Delhi. If the government continues to fiddle, simply hoping that the storm will blow over, it is sadly mistaken.

Let’s face it: for the farmers there the new farm laws constitute a death warrant – as some of their leaders have put it – and therefore a matter of life and death. For the government, on the other hand, it is a question of further expanding the obscene super-profits of crony corporate capitalists, who have already made a killing even as lakhs and lakhs of ordinary people were pushed to destitution during the lockdown. Given this situation, with their backs to the wall, the farmers have no option but to fight back with all the strength at their command.

The government is making a serious mistake in assessing the depths from which the movement arises, if it really believes the fable that ‘innocent farmers’ are being misled by ‘Leftists’ and/or ‘Khalistanis’! The ruling duo have actually never encountered a situation like this before and have perhaps developed some totally misplaced and bizarre ideas about their own invincibility. They would do well to realize that through these laws, they are pushing the entire country into another deep abyss from where no one will come out unscathed. That is why, the Supreme Court too is deeply mistaken if it believes that it is just a matter of some ‘experts’ explaining the laws to the ‘misled’ farmers, for the farmers can see their real intent very clearly.

An indication of the depth of the movement and indeed of its sweep, is the fact that unlike most other ‘political’ or politically mobilized ones, this one is marked by the deep involvement of traditional religious and caste institutions and networks – be they Gurudwaras or khap panchayats. One of the distinctive features of the present movement, as this report by Amandeep Sandhu shows, is how caste solidarity among the Jats has operated to galvanize support from across the states of Haryana and Western Uttar Pradesh. It is not that traditional networks have not been involved in mobilizing earlier – they certainly were, for instance in time of the Mahendra Singh Tikait-led BharatiyaKisan Union (BKU) movement in the late 1980s and early 1990s. What is distinctive about the present movement is that its militant stance on the farm laws is not just based on a regressive idea of caste solidarity. It has, to an extent, an open character that has made it possible for Dalit/ Mazhabi Sikh landless labourers to join in – not to mention the massive high-profile participation of women.

As researcher Shreya Sinha points out,

This broad resistance reflects multiple responses to the political economy and the politics of post-Green Revolution Punjab. In recent years, mobilisations have cut across class, caste and gender, with all their underlying contradictions and emerging possibilities. Drawing on my research on Punjab’s agriculture over the past seven years, I argue…that there has been a marked departure from business-as-usual in the state’s farmer politics.

But the going has not been smooth as there have been longstanding caste animosities and conflicts between the Jat Sikhs and the Dalit labourers. Sinha narrates through her interview with Joginder Singh, leader of the BKU (Ekta Ugrahan) that

This new unity builds on years of pioneering work by the state’s largest farmer union, the BKU (Ekta Ugrahan). Identifiable by their green and yellow flags, the BKU (Ekta Ugrahan) has managed to bring on board other farmer unions like the BKU (Dakounda), Kirti Kisan Union, and Punjab Kisan Union. In a conversation I had about a year ago with the BKU (Ekta Ugrahan)’s leader, Joginder Singh, he said that these efforts have been conscious and have required utmost commitment, given the caste and class divide between farmers and labourers. In 2004, for the first time, Joginder Singh’s union decided to support an ongoing agitation of a farm labour union in Ludhiana district by providing them tea and washing their used utensils. As the labour was primarily Dalit, this act marked an important moment in overcoming the caste divide and building solidarity.

Sinha also cites an essay by Navsharan Singh to add that since then this has been part of the longer term work of the Left-leaning Kisan unions. For instance, in 2010, the BKU (Ekta Ugrahan) and some other farmer and farm labour unions ‘supported an agitation by Dalits in Mansa district to ensure they received compensation and rehabilitation when their homesteads were acquired for a power plant.’ The BKU (Ekta Ugrahan), says Sinha, ‘has also supported the ZameenPrapti Sangharsh Committee, an organisation demanding land rights for Dalits, both through funds and through protection against physical attacks by the dominant Jats.’

Despite all this, Leftism and Sikhism have come to work together, argues Sandhu in the piece linked above. Clearly, despite longer histories of conflict, a new relationship has been struck that allows for working together despite the caste-class divides. In part this is also possible because there is a geographical separation between the areas of influence of the more conservative and the radical farmers’ unions, according to Sinha. However, in a sense, this has also become possible because of the recognition of the larger threat of corporate agribusinesses taking over and destroying all their lives.

Women’s participation has of course, been very prominent in the movement and many of the activists of the farmers’ unions seem to have become active against the background of the larger folding tragedy of Punjab – with Green revolution, followed large-scale indebtedness and suicides, then by years of terrorism and finally, drug addiction. It is against this combined background that we see the emergence of women leaders who came forth as key organizers in the different unions.

What the Govt is Missing

However, to return to our initial point. All said and done, this movement is certainly what it is because it is all this and much more: the crucial role of the traditional networks of religion and caste solidarity indicates that the movement arises from the depths of society and envelops all sections. But unlike many other movements where these networks mobilize, where social conservatism reigns supreme, we can see here an openness that can potentially allow for certain forces of change as well – at least in the gender and caste domains. The combination of these two kinds of forces and their co-presence in the movement, is an index of the fact that it has acquired very deep roots as well as a very broad sweep. This movement, in that sense, is not just a ‘political’ movement that often remains on the surface. The government perhaps does not realize that the time when marriages and other social ceremonies become occasions for mobilization and declaration of support for a movement, is not usual time. It does not understand that no media cacophony, no machinations can work at such a time.

And just in case, the government thinks that this is just a matter of a single state, i.e. Punjab, it should rapidly disabuse itself of such an impression. In the last analysis, this widespread mobilization is largely made possible by the fact that it is the life of the peasantry that is in question. This kind of support is unfortunately not possible in the case of the working class, which in our context, is always made up of a largely migrant population. A working class mobilization therefore, always remains on the surface. The farmer or the peasant, on the other hand has deep roots and connections in the society where s/he lives and works and if internal barriers of caste and class can be overcome, its power can be simply unstoppable. 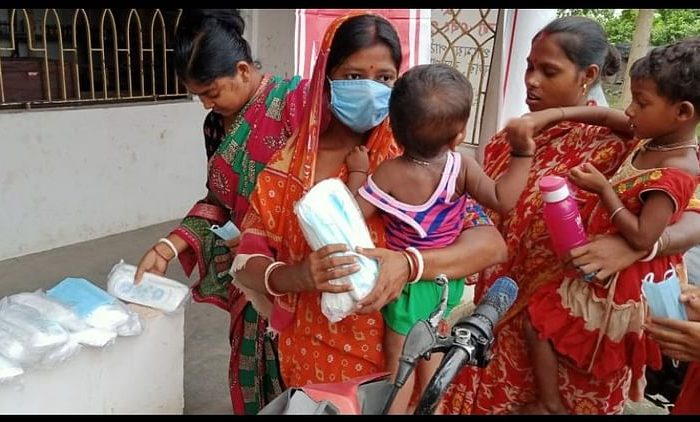 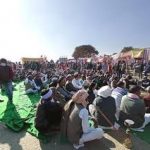