We have compiled five Bonedi Bari Durga Puja and we are sure that the grandeur will leave you awe-struck.

Durga Puja is not just a festival for Bengalis, because it is an emotion and a colourful carnival. Bengal decks up in glittering lights and vibrant hues and the essence of festivities is hard to miss. While there are numerous famous Puja organizing committees, nothing beats the traditional feel of a Bengali bonedi barir pujo. These traditional households have celebrated Durga Puja for decades and some even for centuries and visiting these aristocratic houses is nothing less than taking a trip through pages of history. We have compiled five such Bonedi Bari Durga Puja and we are sure that the grandeur will leave you awe-struck.

WHAT IS A BONEDI BARI?

A Bonedi Bari or a traditional Bengali household defines the great houses that once belonged to the zamindars, aristocrats and people of the upper strata of society. The opulent lifestyle of the zamindars was aptly reflected in the kind of Durga Puja they organized. Other than a showcase of wealth, it was also a centre of culture and a reminder of Bengal’s glorious past. Some of the Pujas in such households are over 150 years old!

The one grand Bonedi Bari which has maintained its glorious legacy of Durga Puja is Sovabajar Rajbari. Raja Nabakrishna Deb celebrated Durga Puja at this huge mansion in 1757 on a grand scale. Even top British officials like Lord Clive and Warren Hastings were invited to the fete. Currently, two separate pujas happen at the Rajbari and you will be surprised to know that their Durga idol is different from that of the depictions made generally. Instead of the face of the lion as Devi Durga’s companion, a horse’s face can be seen here.

Another puja that started from the British era, the palace of Rani Rashmoni, still hasn’t lost its magnificence. Coming from a lower caste, Rani Rashmoni received a lot of backlash before she could start Durga Puja at her house. The opulent mansion has a huge thakurdalan where the idol is worshipped. Interestingly, all the faces of the idols, including Devi Durga, are made by hand every year by Muslim artisans and Durga’s skin colour matches that of the stem of a Shiuli flower. That’s why one can easily observe that not everything in the idol is symmetrical and perfect.

Sabarna Roy Chowdhury was one of the zamindars who has his name on the pages of history as the previous owner of villages Kalikata, Sutanuti and Gobindapur. The village Kalikata (now Kolkata) was leased to the British by the zamindar, so you can roughly figure out how rich he was. The uniqueness of the idol here is that it has Chaalchitras divided into three parts and has pictures of the ten different images of Goddess Shakti known as the Dasamahabidya. With an idol of Shiva and Rama on both sides, the goddess is worshipped. The colour of Devi Durga is reddish or it can be of light golden as mentioned in the Durgabhaktitarangini.

The Durga puja of Laha bari started some 170 years ago and is still celebrated with much pomp. In this bonedi bari, Devi Durga is seen in a traditional ekchala form. On Vijaya Dashami Devi Durga is not carried on the shoulders as is done traditionally during immersion but she is carried in the arms of men who have been performing the puja as a part of the family lineage.

One of the most magnificent pujas of North Kolkata, the Daw bari have been organising Durga Puja since 1859. Late Sri Narasingha Chandra Daw started this puja and it has been observed with the same rites, rituals and tradition till date. 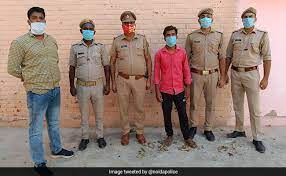 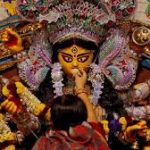