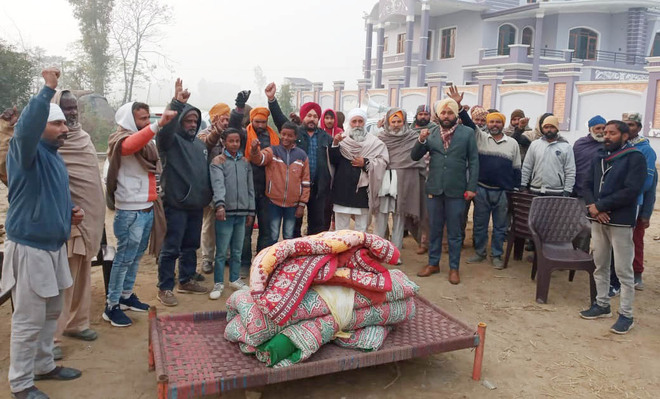 Jalandhar, While the government seems hardly bothered about how protesting farmers are faring during inclement weather at Delhi borders, Dalit labourers, who work in fields for farmers, were considerate enough to collect quilts, mattresses, tarpaulins and wooden planks for them.

Over 200 quilts and mattresses, 100 tarpaulins were collected from Dyalpur, Bulla and Dheerpur villages on Saturday. Another 100 wooden boards (or planks) went from Mehatpur, so that farmers have something to step on when they get down from tractors during rain.

During the ongoing farmers’ agitation, Dalit labour leaders across villages in the region have been going from home to home mobilising support for farmers. Labourers, who are the most marginalised ones of the income groups in the state, which have traditionally been pitted against farmers, are expressing an overwhelming solidarity with farmers in the struggle.

Mattresses, blankets, quilts, khes and lois, which labourers brought in from their homes piled up within minutes on a cot placed in the midst of Dyalpur three days ago. Other labourers’ families brought in money, ration, snacks and all they could, to send to the protest site at the Delhi border.

The Zameen Prapti Sangharsh Committee and Pendu Mazdoor Union will also hold joint conventions at Sangrur (January 5), Jalandhar, Amritsar and Moga (January 6) to consolidate labourers. The ultimate aim is to mobilise labourers to head to Delhi in solidarity with farmers.

Surjit Ram Bhullar, a labourer from Bhulla village, said: “Around 50 of us have been going from home to home asking labourers to do their bit to support the protests. Several jathas have headed to Singhu and more are preparing to go. The response has been overwhelming. We have sent hundreds of mattresses and beddings from the region. From our village, we sent 50 quilts. This is our struggle, not just that of farmers. If farmers lose their land, we will lose our livelihood. Their fields sustain us. We are with them.”

Gurcharanjit Singh, a farmer from Dyalpur village and member of the Bharti Kisan Union (Qadian) as well as the Kirti Kisan Union, said: “The kisan andolan has acted as a unifying factor for farmers and labourers. Any fault lines being created between labourers and farmers have vanished during the farm stir. There has been a huge outpour of solidarity from labourers. House after house pitched in with Rs10 to Rs1,000 and offered blankets, mattresses, clothes — all they had — to support farmers. There are about 4,000 labourers in Dyalpur alone and they all are with farmers. Farmers and labourers’ groups are going from house to house raising awareness among people. In jathas, you can’t distinguish a farmer from a labourer. Farmers and labourers have both understood that one can’t survive without each other.”

Balwinder Kaur, tehsil president of Pendu Mazdoor Union (democracy), whose own daughter has gone to Singhu, says: “Jathas are going in everyday and I have sent my daughter. I will also go myself. At our village, women are mobilising support among labourers for farmers. We won’t get food to eat if farmers lose their land.” 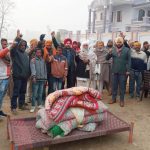