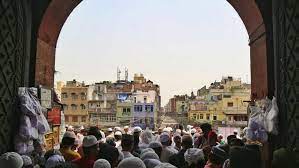 While 1857 hastened the transformation of Shahjahanabad to Delhi, which subsequently became Old Delhi when the British shifted their capital to New Delhi in 1912 (N. Gupta 1981, 186), it was 1947 that sealed its fate. The bloody partition of India resulted in Old Delhi losing over two-thirds of its Muslim population. Laurent Gayer says that Delhi’s Muslim population shrank from 33.22 percent in 1941 to 5.71 percent in 1951 as many Muslim families migrated to Pakistan (2012, 217). The story of this migration is complex and violent, as revealed in Vazira Fazila-Yacoobali Zamindar’s study of what she calls “the long partition” (2007). While others have noted the chaos set in motion by a poorly conceived partition plan and an attenuated timeline (Y. Khan 2007, 2, 11–12), Zamindar shows how it was in the decades after the partition of India that ideas of nationhood and belonging were worked out (2007). Indeed, the context for the migration of Delhi’s Muslims to Pakistan was not preformed notions of nation and belonging. Rather, the context in which to understand this mass exodus of Delhi’s Muslims is violence—20,000 Muslims were killed in Delhi in partition violence, and 44,000 lost their homes.

While the partition plan had envisioned a transfer of populations in Punjab and Bengal, it had not anticipated or planned for the 323,000 Hindu and Sikh refugees who arrived in Delhi from Pakistan (Zamindar 2007, 28). Amid the chaos that accompanied the arrival of these refugees, there were violent conflagrations all over Delhi in which Muslim families suffered disproportionately.

Many Muslims fled their homes, seeking shelter with friends or in camps like the one in Delhi’s Purana Qila (Old Fort). While many of these families were simply trying to escape violence, they were labeled “evacuees” by the Indian state; their properties were deemed “evacuee property” and either seized by the state or illegally occupied by the increasingly desperate Hindus and Sikhs from Pakistan (27–33). Zamindar argues that although both sets of populations had been displaced, the newly formed Indian state saw itself as responsible only for Hindus and Sikhs (31, 38–39). As Zamindar powerfully demonstrates, it was not national sentiment as much as violence and dispossession that drove Delhi’s Muslims to Pakistan. They had no homes and nowhere else to go to. Many Muslims, and even the Pakistani state, saw their migration as temporary rather than a permanent decision to become Pakistani (7, 42–44).

Many of those I spoke to talked about partition and its enduring legacy for Old Delhi’s Muslims. Both Aamir Sahib, mentioned above, and Rafiq Sahib, a wealthy businessman in Old Delhi, discussed the seizure of Muslim homes. Rafiq Sahib told me that homes were declared evacuee property and given to refugees, even when the relatives of those who had left for Pakistan still lived in Old Delhi. Illustrating Zamindar’s conception of the “long partition,” Aamir Sahib said that most of the older Muslim families in Old Delhi had relatives in Pakistan, and people continued to migrate, mostly in search of jobs, until 1971, when the borders closed. Echoing this narrative, Rafiq Sahib was more explicit. He argued that people considered going to Pakistan because they were met with suspicion when they applied for work in India. “But you are Pakistani,” people would say. Still, according to him, many did not go, hearing from relatives there that they were “pareshan” (troubled). Many of those who did go returned, unable to deal with the political unrest in Pakistan or the separation from family. The younger generation born after the partition had little interest in going, according to Rafiq Sahib, because they had few connections to the people or the place.

While partition violence eventually abated, Rafiq Sahib’s words highlight the enduring legacy of these violent events. Muslims were viewed with suspicion, often passed up for jobs, and increasingly constructed as an “other”. The plural cultural and social worlds of Shahjahanabad had given way to exclusion, prejudice, and distancing. This change was poignantly captured in the words of Nuzrat Begum, who lived in Chitli Qabar and whose roots in Old Delhi go back to the Mughal era. Born around 1913, she told me that her family kept separate vessels and plates in their homes so that they could entertain their Hindu friends, cook for them, and serve them food using dishes that had never contained meat. Indexing the distance that has grown between Hindus and Muslims in Old Delhi, she said that now there is less need to do so because “the love has been destroyed.”

Ameena Baji, a woman who lives in Shahganj and works in Delhi’s burgeoning informal sector (see chapter 2), also traces her lineage in Old Delhi to “Mughal times.” She told me, “They have excluded Muslims after 1947. If they would allow everyone to work together, India would be very advanced. They have betrayed Hindustan—the BJP and the RSS. The Congress also does it secretly. The BJP does it openly.” Another conversation I had with Ameena Baji five months later is even more illustrative of the othering and marginalization that Old Delhi’s Muslims have faced since partition, and about who is responsible.

K: This was in the nineties?

K: Do you mean RSS people, or ordinary people?

Ameena Baji: Yes, but even ordinary people say this. And I feel that these people who talk like this—I do not mean all Hindus, but those who talk like this—they have no understanding. I believe if people unite and work together, then Hindustan will be much more advanced. But those Muslims who remained behind because of their work or business, those who studied a lot, those who built their own homes here, they did this only from their own effort. Otherwise, there is no place for Muslims in India.

The RSS (Rashtriya Swayamsevak Sangh), referenced in these conversations, is an all-male organization formed in the 1920s. Deeply inspired by and modeling itself on European fascists of the early twentieth century (Bhatt 2001, 124–33), and banned multiple times in postcolonial India, the RSS is the ideological inspiration for a group of right-wing Hindu organizations collectively known as the Sangh Parivar, or Sangh Family. The BJP, or Bharatiya Janata Party, an electoral party that currently dominates Indian politics, is one of these organizations.

The organizations associated with the Sangh Parivar espouse Hindu nationalism, a majoritarian movement that views India as a Hindu nation and Muslims and Christians as foreigners (see K. Menon 2010; Hansen 1999; Jaffrelot 1999; Basu 1995). They have been responsible for extreme violence against religious minorities in the country (see Ghassem-Fachandi 2012; Jaffrelot 2007; Appadurai 2006; Sarkar 2002). As I have argued elsewhere, the expansionary power of the Sangh Parivar is enabled in part by its ability to present diff erent faces through its various organizations, some less extreme than others, and to articulate with multiple interests and diverse constituencies in contemporary India (K. Menon 2010). The BJP has risen to dominance not just because of the broad base of the various Sangh Parivar organizations, but also by successfully appealing to the majoritarian sentiments of a larger Hindu right not necessarily affiliated with any of these organizations. What is interesting about my conversations with Ameena Baji is that she recognizes that the exclusion of Muslims has been done not just by the BJP and the RSS but by centrist parties such as the Congress in their attempts to appeal to Hindus who might otherwise be drawn to the BJP (Hasan 2012, 10–45) and by “ordinary people” compelled by Hindu nationalist sentiments and antipathy to Muslims. What her words suggest is that the marginalization of Indian Muslims cannot be dismissed as simply an artifact of the rise of the right, but rather is more broadly naturalized on the political landscape of the country.

Old Delhi became Delhi 6 on August 15, 1972, when the pin code was introduced to India, and postal addresses in Old Delhi were followed by the postal index number 110006.

The major event of that time etched in the memories of Old Delhi’s Muslims was the Emergency, declared by Prime Minister Indira Gandhi and her Congress-led government from 1975 to 1977, when constitutional rights were suspended in the name of the national interest. While censorship, arrests of the opposition, and suppression of basic civil rights were rampant during the Emergency, it is remembered most poignantly in Old Delhi for its forced sterilization campaigns, the violent demolitions of property that resulted in the deaths of many Muslims, and the displacement of thousands of Muslim families from their homes. Protests against sterilization and demolitions at Dujana House and Turkman Gate in Old Delhi were met with extreme state violence in which thousands were injured or killed, women were raped, and houses were looted by state authorities (Tarlo 2003, 38–41). Hundreds of thousands were displaced from their homes and relocated to one of forty-seven resettlement locations outside Old Delhi (13). As Emma Tarlo notes, what people lost in the Emergency years was their locality, a loss that she underscores is “different from loss of space” (143). Drawing on Appadurai’s definition of locality as “a property of social life, a structure of feeling that is produced by particular forms of intentional activity and that yields particular sorts of material effects” (Appadurai 1996, 182), Tarlo argues, “What these people lost in 1975 was not so much their ancient homes, which they had already lost, but rather their location in the heart of the Muslim community of the Old City. It was a loss of locality” (Tarlo 2003, 143).

Looking back at the history of Old Delhi and its bloody transformations from Shahjahanabad to Delhi, to Old Delhi, and to Delhi 6, it is hard to imagine how any of Shah Jahan’s “Muslim place” has survived (see figure 0.3). And yet it is there in the stories people tell about their lives, in the crumbling facades of magnificent buildings trapped in the midst of electricity poles and tangled wires, in the names of streets and neighborhoods, in the regular references to the “walled city” even though most of Shah Jahan’s walls were demolished after 1857, in the easily missed taqs (alcoves) along the streets where some remember to offer fresh flowers to various jinns or saints, in the many Muslim spectators who go out to watch the annual Ram Lila procession and performance of the Ramayana at the Ram Lila Maidan, and in the everyday religious practices that still recall shared cultural worlds. Just as Sufi shrines were crucial, as Nile Green has argued, “to the making of Muslim space” or a “space in which Muslims felt they belonged” in India (2012, xiv), in this book I focus on the narratives of people like Aamir Sahib and Nuzrat Begum that recall shared religious and cultural worlds of the past, the practices of piety that visibly assert Muslim identity in the present (chapter 3), and the rituals and religious discourses that root Muslims in place in India (chapters 4 and 5), as ways to make place for Muslims in a country where a resurgent religious right, and an increasingly strident majoritarian politics, threatens the fabric of coexistence that once was and perhaps still might be. 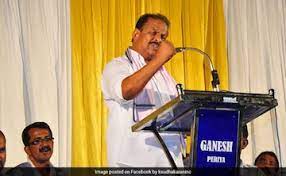 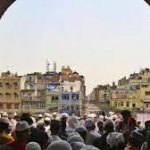