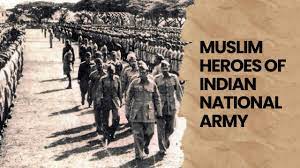 The Muslims of India, especially those settled in Rangoon and surrounding areas gave their lives and fortunes to the INA for the sake of the freedom of India. The efforts by Muslim soldiers and the business community at times made Subhash Chandra Bose praise them in unprecedented words. It’s a well-documented fact that numerous Muslim troops and officers are said to have received from Netaji the Tamgha-e-Sardar-e-Jang, Tamgha-e-Vir-e-Hind, Tamgha-e-Bahaduri, Tamgha-e-Shatru Nash, Senad-e-Bahaduri, and other decorations.

Following is the list of 12 such people who became legends due to their contribution and struggle in the INA.

Freedom Fighter Captain Abbas Ali was born in Bulandshahar district of Uttar Pradesh on January 3, 1920. Abbas fought for the liberation of our country as a captain in the Indian National Army. Capt. Abbas was inspired by the speech of Subhas Chandra Bose in 1943 and decided to commit his life to our country’s freedom. Abbas was detained by the British Army and given a life sentence. But after India became independent, the death penalty was revoked. Captain Abbas Ali breathed his last on 11 October 2014 at Aligarh.

Memon Abdul Habeeb Yusuf Marfani was a freedom fighter and businessman from the Dhoraji town of Saurashtra, Gujarat. On July 9, 1944, when Subhas Chandra Bose founded INA in Rangoon, Marfani was the first to come forward to contribute financially to the Azad Hind Bank. Soon, the box swelled with contributions from Indian expats in Rangoon and Singapore. Yusuf Marfani was so close to Netaji that he gave Rs 1 crore in cash and Rs 3 lakh in jewellery in 1944, which would be worth almost Rs 800 crore today.

Zain Al-Abdin Hasan was born to an anti-colonist family in Hyderabad on 11th April 1911. He became acquainted with Subhas Chandra Bose when the latter was addressing a meeting of Indian prisoners of war In Germany. Abid became Bose’s close aide and was given the title of a Major in the INA. On the suggestion of Abid, the INA adopted “Jai Hind” as its slogan. After independence, he joined the Civil Service in 1948 and retired as the Ambassador to Denmark in 1969. Aged 73, He passed away in 1984 in his hometown.

M.K.M. Ameer Hamza also known as Hamza “Bhai” was born on 22 January 1918 at Ramanathapuram, Tamil Nadu. Ameer Hamza was a member of Subhas Chandra Bose’s Indian National Army and a liberation fighter from Tamil Nadu. As a teenager, he travelled to Burma for trade and there he supported and donated millions of Rupees to INA. The British government detained and questioned him for supporting Netaji’s Army. In his final years, he suffered from poverty and struggled. On January 1, 2016, Ameer Hamza passed away.

Azad Hind Fauj officer Shah Nawaz Khan was born in Rawalpindi, British India. He joined the INA after the arrival of Subhash Chandra Bose in South-East Asia. Shah Nawaz led the INA troops into North-Eastern India, capturing Kohima and Imphal, which were thereafter held by the INA under Japanese authority. He also created history by being the first Indian to hoist the Tricolor at Red Fort after taking down the flag of the British Empire. Post-independence Shah Nawaz was active in politics, elected four times Lok Sabha from Meerut.

Major General Mohammed Zaman Kiani served in the British Indian Army before transferring to the Indian National Army (INA), under the command of Subhas Chandra Bose, where he oversaw the 1st Division. After graduating from the Indian Military Academy with the Sword of Honor, he enlisted in the Punjab regiment. His efforts to the Azad Hind were eventually recognised, and the Indian government posthumously gave him the Netaji Medal. He died on June 4, 1981.

Nizamuddin, whose birth name was Saifuddin, was born in 1901 in the village of Dhakwan (in the current Uttar Pradesh district of Azamgarh. Saifuddin left his house when he was in his early 20s and sailed from Calcutta to the metropolis to join the British army. While he was serving in the colonial army He overheard a British army general urging white soldiers to let the Indian sepoys die but to save the donkeys to carry food for the rest of the force. He shot the officer out of rage at the callousness and injustice of the comments and then fled to Singapore. Nizamuddin was employed as a driver of Subhash Bose, driving the leader everywhere. He also battled alongside Netaji in the forests of Burma between 1943 and 1944 against the British Army (now Myanmar). He was shot three times in 1943 after jumping in front of him (Netaji) and saving his life. He was given the nickname of “colonel” lovingly by Netaji himself.

Colonel Habib ur Rahman who co-founded Azad Hind Fauj alongside General Mohan Singh was put in command of the Administration branch at the organization’s headquarters. He oversaw a mission to Burma. Netaji was given the position of Officer in Charge of the Training School after taking over the command of the Azad Hind Fauj. He also took his oath as a minister on October 21, 1943, the day Azad Hind Sarkar was established. Later, he was also named the Deputy Chief of Army Staff, and on August 18, 1945, he accompanied Netaji on his last known trip.

General Mohan Singh named Inayatullah Hasan as the director of Azad Hind Radio. He created well-known nationalistic radio plays that compelled All India Radio to air a competing storyline in India. Later, Netaji named him the head of the training division, where he instructed citizens, including women and children, in the use of weapons.

The first national flag to fly over free Indian land was flown by Colonel Shaukat Ali Malik. At Moirang in Manipur on April 14, 1944, Malik, the commander of the Bahadur Group of the Azad Hind Fauj, raised the flag. Moirang was the first region in India to be taken over by the INA and the first location on the Indian subcontinent that the Azad Hind Government controlled. Malik received the Sardar-e-Jung for leading his soldiers in this capture. After establishing a civilian administration, intelligence agents were dispatched inside enemy territory. One of the highest military honours of Azad Hind Fauj, the Tamgha-e-Sardar-e-Jang, was bestowed upon him by Netaji.

The connection between Azad Hind Sarkar and Azad Hind Fauj was Colonel Mehaboob Ahmad. He served as Major General Shahanwaz Khan’s counsellor throughout the campaigns in Arakan and Imphal

Before Netaji arrived from Germany, Karim Ghani, a Tamil journalist who resided in Burma, served as the leader of the Indian Independence League. He took an oath to serve as one of the six advisors when Azad Hind Sarkar was established. Karim Ghani served as Dr Ba Maw’s parliamentary secretary in Burma prior to the Second World War. He served as the manager of “The Muslim Publishing House,” the editor of the Malayalam daily Malayan Nanban, and the editor of the Malay edition of Dawn, under the name Sinaran, as president of the All Malaya Muslim Missionary Society (AMMMS) and a representative in a number of other organisations, Ghani was also active in the Muslim League.

Note: This news piece was originally published in thecognate.com and used purely for non-profit/non-commercial purposes exclusively for Human Rights . 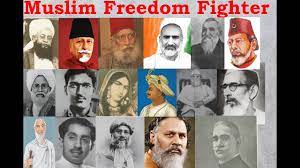 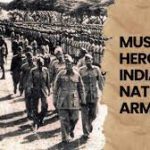