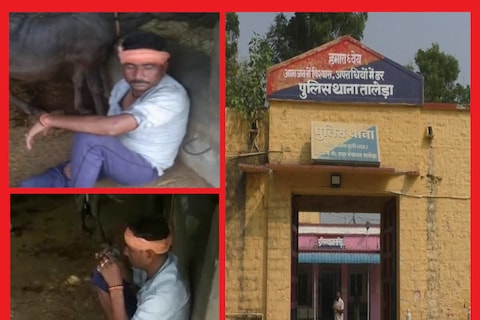 Dalit youth tied with chains in Rajasthan: The cases of atrocities on Dalits in Rajasthan are not taking the name of stopping. The latest case has come to light from Bundi district of Kota division. Unable to repay the loan here, the miscreants kidnapped a Dalit youth and took him hostage.

Bundi. In Bundi district of Kota division, where the district police is thrashing to stop Dalit atrocities by implementing Operation Equality, on the other hand, a shocking incident has come to the fore in Taleda police station area of ​​the district. In Alphanagar village of Taleda area, about half a dozen gangsters held a Dalit laborer hostage for 31 hours and kept him chained in a cattle shed and tortured him (Kidnapped and held hostage). On the report of the victim, now the police have registered a case against the accused. The police is involved in the investigation of the whole matter.

According to the police, Radheshyam Meghwal (35), a resident of Biluba village, has registered a case against four unidentified persons, including Alfanagar paddy producer Paramjit Singh and his younger brother, for kidnapping and torturing for 31 hours by being held hostage. The victim has told in his report that Paramjit Singh had hired Hali at his farm house 3 years ago for an annual wage of Rs 70,000. Apart from this, he had also taken a loan of 30 thousand rupees from him on interest due to the marriage of his sister.

He fell ill because of working day and night

Radheshyam says that he fell ill due to working day and night. After 6 months he left Paramjit Singh’s farm house. Radheshyam alleges that Paramjeet and his younger brother started harassing him continuously due to non-accounting of Rs 1 lakh taken in advance. After 4 months of leaving the job, he returned 25 thousand rupees and asked for a deferment for the rest of the money. Two years ago, Paramjit Singh and his younger brother took Radheshyam away from the house and got him to do the harvesting work for 10 days.

Could not return Rs 3 with interest per hundred rupees

Radheshyam alleges that after continuous harassment from Paramjit Singh, he deposited Rs 25,000 again. But even then Paramjeet did not stop torturing her. Meanwhile, the corona epidemic arrived. Due to this he could not return Paramjeet’s money. He struggled financially for 3 years. Due to this, Paramjeet could not return the money with interest of Rs 3 per hundred.

On Sunday, around 11 am, Radheshyam was sitting at a shop in Bharta Bawdi village. There Paramjeet, his younger brother and four unknown people kidnapped Radheshyam on three bikes. They took Radheshyam to Paramjeet’s house and tied him with a sankal in the animal enclosure there. Radheshyam was beaten up with an iron pipe. This caused injuries to his body.

Give 1 lakh 10 thousand rupees and get rid

On receiving information about Radheshyam’s kidnapping, his younger brother Ravi Shankar reached Paramjeet’s farm house on Monday morning. When he requested to release Radheshyam, Paramjeet said that give 1 lakh 10 thousand rupees and take him away. In the afternoon of the same day again Ravi Shankar went to Paramjit with his maternal uncle’s son but he did not release Radheshyam.

By Radhey Shyam was released with 46 thousand rupees

Police registered a case against 6 accused

On Tuesday, a frightened Radheshyam reached the police station and informed DSP Shankarlal about the incident. In view of the seriousness of the matter, the DSP directed the SHO Digvijay Singh to take immediate action. On the report of Radheshyam, the police have registered a case against four unidentified people including Paramjit Singh and his younger brother for kidnapping, taking hostage and beating and humiliating with caste words.

Had taken loan for sister’s wedding

Victim Radheshyam says that after the death of his father years ago, he was forced to become a bonded laborer due to the responsibility of raising a widowed mother, younger sister and brother. For the marriage of his sister, a loan of 30 thousand rupees was taken from Paramjit Singh. Apart from this, 70 thousand rupees were taken in advance of annual wages.

Note: This news piece was originally published in news18.com and used purely for non-profit/non-commercial purposes exclusively for Human Rights. 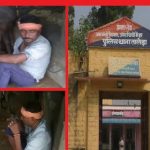