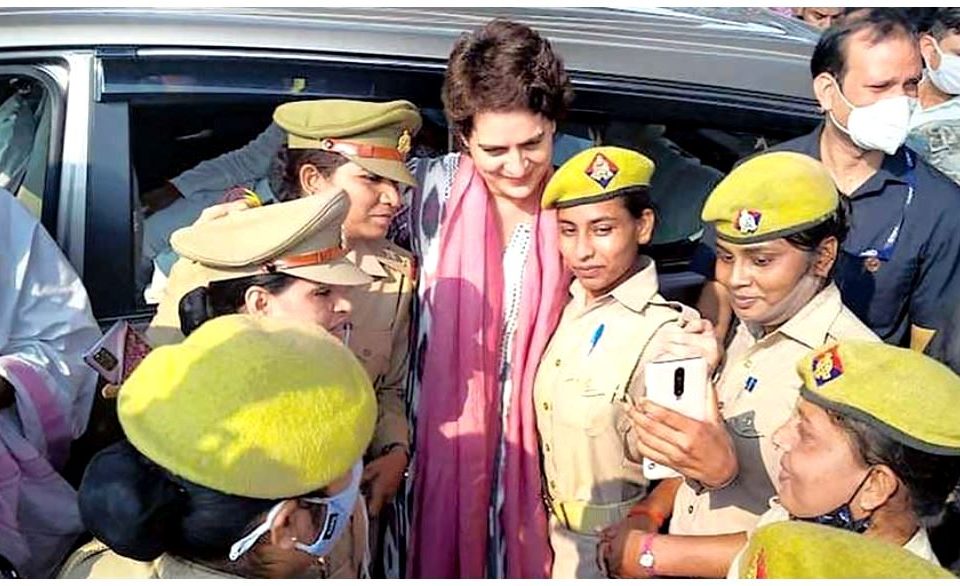 Mystery surrounds the death of Arun Valmiki, a sweeper in his 20s, who was detained for alleged theft but never produced in court during two days in custody

Priyanka and several policewomen pose for a picture in Lucknow. She tweeted later that there was word  the Adityanath government would take action against the policewomen for the photograph. If it were so, then action should be taken against her too, Priyanka added.

Uttar Pradesh police stopped Priyanka Gandhi Vadra on a highway for over two hours on Wednesday afternoon while she was travelling to Agra to meet the family of a Dalit youth who had died in police custody on Tuesday night.

“What is the Uttar Pradesh government afraid of? Why are they stopping me?” the Congress general secretary, detained earlier this month on her way to Lakhimpur Kheri, tweeted while arguing with the police on the highway.

Stopped around 3pm on Lucknow’s fringes, at the entrance to the expressway to Agra, Priyanka was eventually allowed to resume her journey at 5.40pm. She was expected to reach her destination, 360km from here, at night.

Mystery surrounds the death of Arun Valmiki, a sweeper in his 20s, who was detained for alleged theft but never produced in court during two days in custody. A Congress leader has alleged his body bore injury marks.

A video circulated by Congress leaders shows Priyanka asking a police officer to furnish the magistrate’s order that says she should be stopped.

The officer shows her something — presumably the order — on his mobile, which she takes from his hand and reads. Priyanka then demands the reason she is being stopped.

“Has Section 144 (prohibition on the assembly of five or more people) been imposed on the highway?” she asks.

A male voice similar to state Congress president Ajay Kumar Lallu’s is heard from the background, saying: “Did you impose Section 144 in Kushinagar where the Prime Minister has gathered people and is delivering a speech?”

Eventually, the police accepted Priyanka’s logic and allowed her to leave with three others: the driver, Lallu and a party worker.

On October 7, Priyanka had been stopped in Sitapur on her way to Lakhimpur Kheri to meet the families of four farmers and a journalist mowed down by a Thar, driven allegedly by Union minister Ajay Mishra’s son Ashis Mishra.

She was allowed to resume her journey two days later after the Congress launched a state-wide agitation and her brother Rahul Gandhi arrived in Lucknow intending to intensify the protests.

Priyanka’s tweet from the highway on Wednesday said: “Arun Valmiki died in police custody. His family is demanding justice. I want to go to meet the family.”

After asking what the state government was afraid of, she added: “Today is Bhagwan Valmiki’s Jayanti (birth anniversary). The Prime Minister talked big about Mahatma Buddha but has been assaulting his ideas.”

Valmiki, considered the writer of the Ramayan, is a Dalit icon.

Police sources have said that Arun, a sweeper at Jagdishpura police station in Agra, was detained on Sunday on the charge of stealing Rs 25 lakh from the locker room. The police say the money had been seized from criminals.

Arun is said to have fallen unconscious on Tuesday night. He was declared dead on arrival at the district hospital. 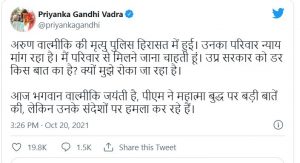 District Congress chief Raghvendra Singh Minu, who had visited the hospital, alleged there were injury marks all over Arun’s body. The post-mortem report has not been submitted yet.

“We have suspended five policemen, including an inspector. We have also registered a murder case against unidentified people. Further action will be initiated after an inquiry,” Agra senior superintendent of police Muniraj G said.

Muniraj had earlier said the police had taken Arun to his home to recover the money and that he fell ill there.

“The police are committing crimes in Uttar Pradesh and the government is protecting the criminal cops,” he said.

Note: This news piece was originally published in www.telegraphindia.com and use purely for non-profit/non-commercial purposes exclusively for Human Rights objectives. 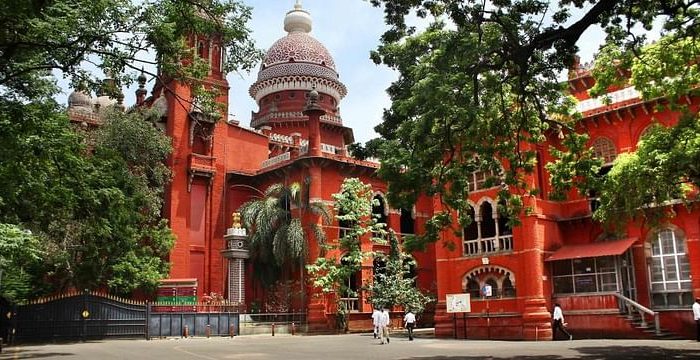 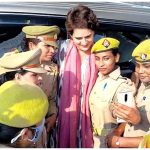