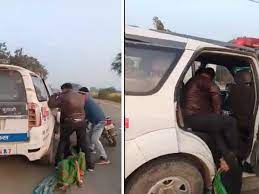 Madhya pradesh: A painful case has come to light in Morena, Madhya Pradesh. Dalit women being dragged on the road by police personnel. The video of this case is going viral on social media. It can be seen in this video that the police sitting on 100 dial is dragging two women of the village.

According to the information received, on January 3, when the police had gone to interrogate a person in Bari village of Morena district, this dispute took place. Police have registered a case against the man and the woman for obstructing official work.

The same police is denying the allegation of dragging the women. Additional Superintendent of Police, Morena, Raisingh Narwaria said that police personnel had reached the village to make inquiries. Here these women obstructed the official work and two other people supported the women in this. A case has been registered in this regard.

The station in-charge told this

Mata Basaiya’s station in-charge Manoj Vardiya said that his sister had filed a complaint against Sahab Singh, a resident of Pura village of Bari, alleging money transactions and assault. Another complaint application was received in the same village. Police personnel had reached the village regarding both these cases.

Sahib Singh was inside the house and when the police called him outside, his mother came and fought with the police. She clung to the feet of the police personnel and did not leave the feet till Sahab Singh fled from the spot. During this, another woman and two men also kept pushing and shoving with the police. A case has been registered against Saheb Singh and another in this matter.

Note: This news piece was originally published in ghamasannews.com and used purely for non-profit/non-commercial purposes exclusively for Human Rights 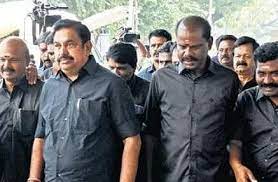 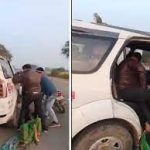