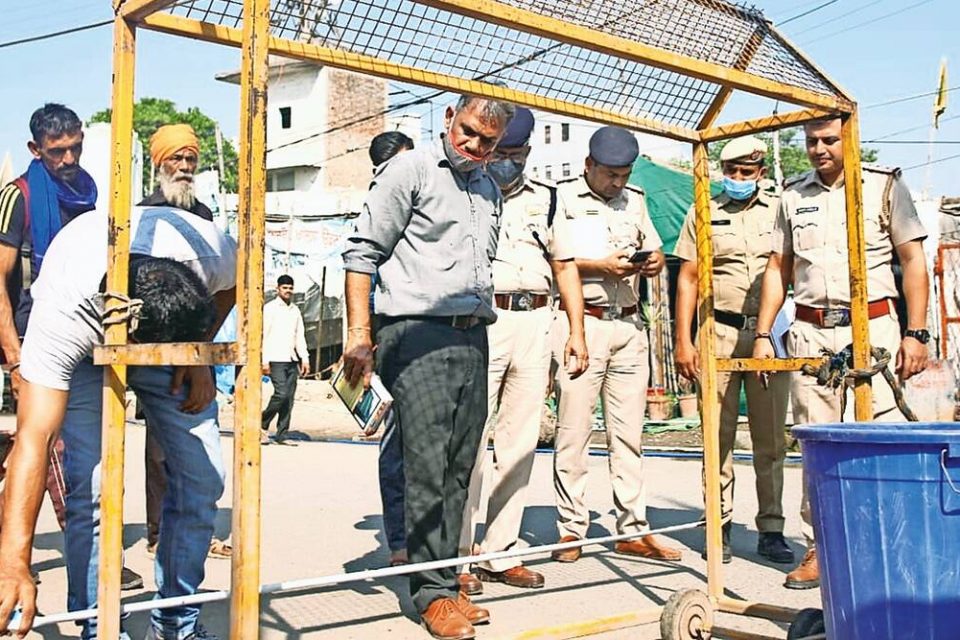 Police said a preliminary probe suggested that the Nihangs killed 35-year-old Lakhbir Singh, a Dalit Sikh resident of Cheema Kalan village in Punjab’s Tarn Taran district, because they suspected him of desecrating the Guru Granth Sahib — a claim the police said had not yet been corroborated.

In a macabre incident that cast a shadow on the ongoing farmer protest at Singhu on the Delhi-Haryana border, a man’s hand was chopped off before he was killed and the body tied to a metal barricade, allegedly by a group of Nihangs, at the protest site early Friday.

Police said a preliminary probe suggested that the Nihangs killed 35-year-old Lakhbir Singh, a Dalit Sikh resident of Cheema Kalan village in Punjab’s Tarn Taran district, because they suspected him of desecrating the Guru Granth Sahib — a claim the police said had not yet been corroborated.

As video clips of the grisly incident did the rounds of social media and outrage mounted, the Samyukt Kisan Morcha, which has been spearheading the protest ever since farmers first showed up at the border site last November, sought to distance itself from the incident. Condemning the killing, the SKM promised to cooperate with police and said it had “no relation” with the attackers or the victim.

“The Chief Minister has directed officers to thoroughly investigate the matter and take the strictest possible action against the culprits. Police have identified the main accused and we hope to make arrests soon,” a senior Haryana government officer told The Indian Express.

Police said a few suspects have already been detained.

A video clip that did the rounds showed the man seriously injured, lying in a pool of blood with his chopped left hand next to his face. Men can be seen standing around and questioning him.

Police said they received information around 5 am that a man was tied to a barricade near the protest site, following which a team from the Kundli police station rushed to the spot.

Sonipat SP Jashandeep Singh Randhawa said: “The injured person was rushed to the civil hospital, where he was declared dead. We have registered a case of murder against unknown persons. There are several videos circulating where some Nihangs have claimed that the man disrespected the holy book. It is suspected he was beaten up and killed by some Nihangs. This is a matter of investigation.”

In Tarn Taran, Cheema Kalan village sarpanch Avan Kumar said Lakhbir Singh lived with his sister, and their parents are no more. Village residents said they last saw him on Tuesday. DSP Sucha Singh said: “He was the only person from the village to go to Singhu.”

In the afternoon, ADGP (Rohtak range) Sandeep Khirwar chaired a meeting of Sonipat police officers and district administration. The crime spot was also inspected by police after they took Lakhbir’s body to the civil hospital for a post-mortem examination.

“It is bizarre what has happened. It certainly cannot be tolerated. It is not yet known if the man was actually involved in any sort of disrespect of the Guru Granth Sahib as is being claimed. Even if the man actually did it, who gave anybody the right to lynch him? The culprits will not be spared,” another senior officer told The Indian Express.

Police have registered an FIR, invoking sections relating to murder and common intention against unidentified persons.

In a statement, police said: “First Information Report (FIR) has been lodged at Kundli police station in connection with murder of a person near the protest site at the Singhu border in Sonipat district. On October 15, 2021, police in Kundli got information that near the protest site at the Singhu border, the Nihangs had hanged and tied a person to a barricade and his hand was chopped off… police reached there, the person had died. Some people were standing there. When the police tried to take the body away, the people at the spot protested. After some efforts, the body was brought to the civil hospital Sonipat for post-mortem.” 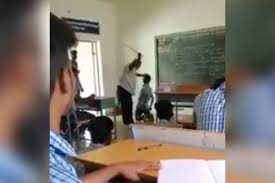 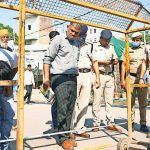