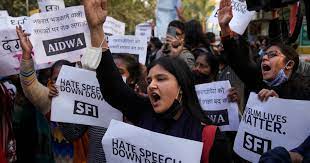 But resistance to the violent and divisive politics of Hindu nationalists is also growing.

In India, the new year started with a perverse attack on the country’s Muslims. On January 1, photographs of more than 100 Muslim women appeared on an app called Bulli Bai, with the claim that they were “for sale as maids”. Prominent journalists, actresses and activists were among those who were targeted.

The apparent attempt to sexualise, humiliate and force into silence politically active and socially prominent Muslim women understandably enraged India’s 200-million-strong Muslim community. After significant backlash, the app was taken down, and several arrests were made in relation to the incident.

But this was only the latest in a string of Islamophobic incidents in India.

On the last day of 2021, for example, a leading national daily ran an overtly Islamophobic ad which was funded by the government of Uttar Pradesh – India’s most populous state. Just a few weeks earlier, several far-right Hindu leaders openly called for genocide against Muslims at a three-day religious summit held in northern India’s Haridwar city.

Also in December, India’s far-right Prime Minister Narendra Modi made connections between Muslim figures from India’s distant history and current-day “terrorism and religious extremism” in two of his public speeches, implying that India’s Muslims should be held responsible and punished for the alleged crimes committed by their “ancestors”.

Meanwhile, Uttar Pradesh Chief Minister Yogi Adityanath, who belongs to the governing Hindu nationalist Bharatiya Janata Party (BJP), declared that the state’s upcoming assembly election can be described as “80 versus 20 percent”, not so subtly hinting that he perceives the state elections as a battle between the Hindus, who make up 80 percent of the state’s population, and the 20 percent Muslim minority.

The anti-Muslim propaganda perpetrated by India’s elected and unelected leaders in 2021 has also been supported by the country’s brazenly Islamophobic media, as well as anti-Muslim laws and policies passed or proposed in many states.

Muslims in India have been feeling under threat since the Hindu nationalist BJP came to power in 2014. But in the past year, hostility towards this community became even more overt. Today, far-right Hindu nationalists, with the support and at times encouragement of the government and local authorities, are making it clear to Muslims that they are no longer seen as equal citizens in their own country. Their dietary habits and religious rituals are being attacked and even criminalised. Muslim women are being humiliated and harassed just because they are Muslim. Muslim livelihoods are under threat. Calls are being made for genocide of Muslims. It is no longer safe to be Muslim in BJP’s India.

Muslims, however, are not the only religious minority being targeted by the increasingly emboldened far right in the country. Christians across India are also facing similar hate and violence. Laws banning conversion are being enacted in state after state, and Christians are being blamed for forcibly converting poor Hindus and tribals. This is turning public opinion against Christian communities. Christian Sunday prayers are being disrupted repeatedly, churches are being attacked, priests are being beaten up.

As veteran journalist John Dayal recently reported, last month “violent Hindu mobs attacked churches, Christian congregations in prayer and groups celebrating Christmas in at least 16 cities and towns”. Such incidents were seen in states all across the country, from Haryana, Uttar Pradesh and Delhi in the north. To Karnataka in the South. According to United Christian Forum, at least 460 attacks against Christians have been recorded in the past year in India.

Under BJP’s leadership, India became one of the most dangerous countries for Muslims and Christians in the world. They are being persecuted physically, psychologically and economically. Laws are being passed to criminalise their religious practices, food habits and even businesses. On top of discriminatory laws, they are also routinely being threatened with and subjected to physical violence. The media, as well as the TV and film industries are prejudiced against them. Perhaps most importantly, the elected rulers of the country are constantly dehumanising and even demonising them to further their own political agenda.

2021 was a year of fear, violence and harassment for Muslims and Christians of India. And as the Bulli Bai incident demonstrated, the Hindu far right’s attacks on religious minorities will likely continue with force in the new year.

But the fight for India’s identity and soul is not yet over. A resistance against violent majoritarian politics is slowly growing in the country, and many who believe in democracy and human rights are fighting tirelessly to save India’s national unity and secular identity.

India’s Muslims are no longer taking the attacks against them laying down. When they discovered that they have been “put on sale” on a so called ” auction app”, for example, Muslim women refused to be intimidated and filed a series of First Information Reports (FIR) to pressure the authorities to find and punish those responsible. When it became clear that Muslims will not let the issue go, security forces  – who had all but ignored similar anti-Muslim crimes in the past – took swift action, and arrested four people believed to be behind the app.

Meanwhile, a new crop of Muslim journalists and activists are tirelessly recording and documenting Islamophobic incidents and attacks across the country, and demanding accountability from state institutions. Due to their efforts, state authorities are increasingly struggling to ignore or downplay the abuse faced by Muslims. These journalists and activists, with the support of the wider Muslim community and many other democratic minded Indians, are working to ensure that the genocidal calls recently made against Muslims in Haridwar do not remain unpunished. Thanks to increasing public pressure, police already announced an investigation into the incident.

Some of India’s leading institutions, who are still upholding the country’s secular constitution, are also helping minorities resist the tide of majoritarian oppression and violence. The Supreme Court, for example, on Monday announced that it would urgently hear a petition seeking the arrest and prosecution of people who engaged in hate speech and incited violence against Muslims in Haridwar. The Court also recently ordered the Tripura police to refrain from taking any penal action against Muslims who speak or write about the episode of anti-Muslim violence experienced in the state in October-November 2021.

The resistance against majoritarian violence in India is growing, because it has to. The BJP will remain in power until at least 2024 and its leaders are not likely to abandon their anti-Muslim and anti-Christian rhetoric anytime soon. Religious minorities are speaking up, because for them remaining silent is no longer an option. They are fighting for their rightful place in their homeland – they are fighting for their survival.

The efforts of India’s religious minorities and their allies to document and bring attention to anti-Muslim and anti-Christian attacks and threats, as well as actions by the Supreme Court, will undoubtedly help slow the tide of majoritarian violence in the country. But India cannot heal and once again become a country where different religious communities live together in harmony on its own. The international community also needs to acknowledge and take a stance against routine harassment of and genocidal threats against Muslims and Christians in the country.

If we look at past atrocities, we can clearly see how the international community’s silence against growing hate and violence against persecuted communities paved the way for genocides.

Today, many powerful and “democratic” nations, who present themselves as protectors of human rights around the world, are refraining from condemning crimes against religious minorities in India because they see India as an important strategic ally against China or a major trade market that they rather not anger.

But if the democratic nations of the world remain silent and allow India continue on this path, the country can soon descend into civil war. And an India at war with itself can neither buy other nations’ products nor help them contain China’s influence. All countries in the region and beyond would suffer if inter-communal violence tears apart the world’s largest democracy.

But this grim scenario is not inevitable. Different religious communities peacefully co-existed in India for long periods in the past, and they can do so again. Muslims and Christians are resisting the majoritarian violence, which is supported by India’s government, and with the help of those around the world who want India to remain a secular democracy where all its citizens feel safe, they can still win this battle for the soul of their country.

The views expressed in this article are the author’s own and do not necessarily reflect Al Jazeera’s editorial stance.

Note: This news piece was originally published in aljazeera.com and used purely for non-profit/non-commercial purposes exclusively for Human Rights objectives. 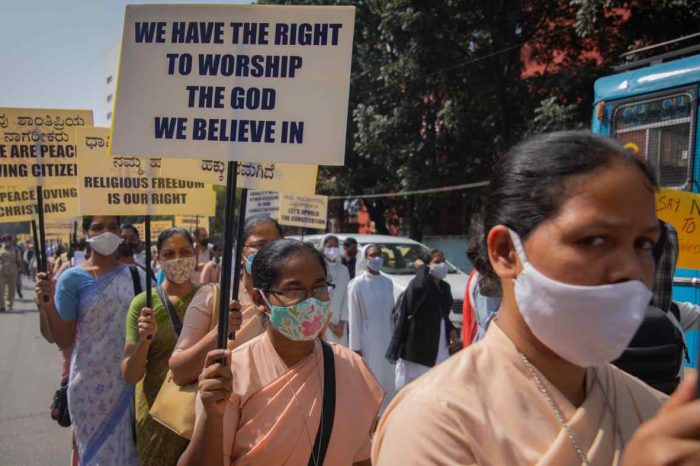 After Muslims, India's Christians the new target of right wing 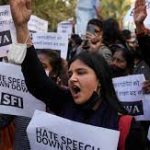