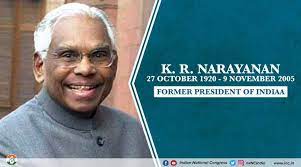 ‘Why didn’t you give me this letter earlier’

When KR Narayan returned from London, Pandit Jawaharlal Nehru appointed him to the Indian Foreign Service. KR Narayan himself once told about this appointment. Narayan had said, ‘When I completed my studies from the London School of Economics, Prof. Harald Laski himself gave me an introduction letter to Panditji. Therefore, on reaching Delhi, I sought an appointment with the Prime Minister. I guess, because I was an Indian student returning home from London, I was given an appointment. It was here that he met me in the Parliament House. We talked for a few minutes about London and things like that and I could soon see that it was time for me to leave. So, I said goodbye and as I left the room, I handed over Lasky’s letter and went out into the large circular corridor. When I had moved some distance away, I heard the sound of someone clapping behind. I looked back and saw Panditji asking me to come back. He had opened the letter and read it as soon as I left my room. Panditji asked, ‘Why didn’t you give this (letter) to me earlier?’ ‘Okay sir, I’m sorry. I thought it would be nice if I handed it over when I left.’ I answered. After a few more questions, he asked me to meet again and very soon I found myself entering the Indian Foreign Service.

After joining the Indian Foreign Service, Narayan was sent to Burma (Myanmar) in his first appointment. Here he met the local girl Ma Tint Tint. But at that time, according to the rules of the Civil Service, an Indian diplomat could not marry a foreign woman. In such a situation, Jawaharlal Nehru gave special permission to Narayan to marry a foreign woman. Narayanan then married a Burmese citizen Ma Tint Tint on 8 June 1951. After marriage she became Usha Narayanan. He was also the Vice-Chancellor of Jawaharlal Nehru University from 1979 to 1980, after his tenure as IFS ended in 1978. After this, the then Prime Minister Indira Gandhi appointed him as the US Ambassador to India in 1980 itself. He was India’s ambassador to the US till 1984. After this he also served as the Indian Ambassador to Thailand and China.

Entry into politics at the behest of Indira Gandhi

After completing the job in the Foreign Service, KR Narayanan entered politics at the behest of Indira Gandhi and joined the Congress. KR Narayan contested elections for the first time at the age of 64. He was elected to the Lok Sabha from Ottapalal seat of Kerala. He won the election from this seat for three consecutive times. After becoming an MP, he became a cabinet minister in Rajiv Gandhi’s government. Narayanan handled the Ministry of External Affairs as well as the Department of Science and Technology in the Rajiv Gandhi government. Later the Congress party was out of power in 1989.

PV Narasimha Rao did not include the cabinet

It is said that when the Congress returned to power in 1991, the then Prime Minister PV Narasimha Rao did not include KR Narayanan in his cabinet. Political experts at that time believed that Narasimha Rao felt that Narayan was inclined towards the left. The Congress CM of Kerala at that time, K. Karunakaran had also said at that time that the reason for not inducting Narayanan in the cabinet was his closeness to the communists. However, later the bitterness in the relationship between Narayanan and PV Narasimha Rao was resolved. Narayanan was unanimously elected as the Vice President of India on 21 August 1992. His name was recommended by former Prime Minister and Janata Dal Le Leader V.P. Singh did it. Later Narasimha Rao also supported his name. The Left parties helped KR Narayanan become the Vice President.

Sitaram Kesari had put his seal on the candidature

In the year 1997, when the term of the then President Shankar Dayal Sharma was about to end, the question was who would be the next President. However, with KR Narayan as the Vice President, it was believed that he should be the next Presidential candidate. The Congress Working Committee authorized the then party president Sitaram Kesri to choose a candidate for the post of President. On the other hand, the responsibility of taking this decision on behalf of the opposition party Bharatiya Janata Party (BJP) was given to former PM Atal Bihari Vajpayee. Then Congress President Sitaram Kesari and United Front convener N. Chandrababu Naidu agreed on the name of KR Narayan by holding a high level meeting. After this, a decision was taken from the BJP side to support Narayanan as well. This almost ensured Narayan’s election to the presidency.

In 1997, when KR Narayanan was made the Presidential candidate from Congress, United Front, BJP also supported Narayanan. However, at that time Vishwa Hindu Parishad raised questions about KR Narayanan being a Dalit. Vishwa Hindu Parishad president Ashok Singhal had alleged that Narayanan was a Christian. Singhal said that Narayanan has not done any work for the Dalits throughout his life. Singhal said that he is neither a follower of Dr. Bhimrao Ambedkar nor Mahatma Gandhi. The forum of SC/ST MPs was also among those opposing Narayan’s candidature at that time. Congress leader G. Venkataswamy was the president of the forum. A 150-member forum had also passed a resolution in this regard. However, the forum was later torn apart on this proposal. However, at that time Ram Vilas Paswan supported KR Narayanan.

In the presidential election, KR Narayanan was elected the tenth President of India with a record 956,290 votes. His lone rival, former Chief Election Commissioner TN Seshan, lost his bail. Seshan secured 50,631 votes. Former bureaucrat Seshan had the support of Shiv Sena and some independent MLAs in this election. According to Returning Officer S Gopalan, Narayanan had got the most valid votes in terms of value in any presidential election held till that time. Narayanan had secured the votes of 4,231 members of the electoral college consisting of members of parliament and state legislatures. While Seshan secured the votes of 240 MLAs. The electoral college had 4,848 members. 171 votes were declared invalid. This was the first time that no campaign was done by any party for the presidential election. It was also the first time that no party had issued a whip to vote in favor of any candidate.

Rubber Stamp was not President, did not accept the recommendation of the Center twice

The office of the President is generally considered to be a mere constitutional post. It is believed that he only seals the proposals of the Centre. However, KR Narayan proved on several occasions that he was not the rubber stamp president. He twice returned the recommendation of the cabinet to dismiss the elected government. First center in 1997 when IK Gujral was the Prime Minister. At that time, a proposal to dismiss the BJP government in Uttar Pradesh was sent to the President by the Union United Front government. After this, a similar opportunity came a year later in 1998. Atal Bihari Vajpayee was the Prime Minister at the centre. His government had sent a recommendation to the President to dismiss the government of Rabri Devi in ​​Bihar. This time too, taking a decision on the basis of his discretion, KR Narayanan refused to accept the recommendation of the Centre. There was a lot of appreciation for KR Narayan’s decision on both of them. Similarly, in 1998, when the Congress withdrew support to the United Front government. In such a situation, IK Gujral had to resign on 19 March 1998. KR Narayan handled this situation very efficiently as well.

Narayanan had returned the Vajpayee government’s proposal and

It is February 1999. Barely one and a half years had passed since Rabri Devi became the Chief Minister. In Jehanabad, 12 Dalits were brutally murdered by upper caste people. There was a fierce ruckus in Bihar. In those days Vajpayee had gone to Jamaica to attend the G-15 conference. In his absence, Deputy PM LK Advani called a cabinet meeting and decided to impose President’s rule in Bihar. Vajpayee was informed of the decision. It is written in some books that Vajpayee personally did not want to impose President’s rule but came under pressure from ally Samata Party. President KR Narayanan was in West Bengal at that time. He objected to this decision and asked the logic. The NDA government immediately got the Governor Sunder Singh Bhandari prepared a report stating that the law and order situation in the state was very bad.

‘Didn’t get the top post because he is a Dalit’

During the Vice Presidential election. There was a lot of discussion about KR Narayan being a Dalit in the election. During that time, KR Narayanan told reporters that please do not put too much emphasis on my cast background. On the other hand, after Narayanan was elected as the President, his brother Bhaskaran said that my brother got this top post not because he is a Dalit, but because he is eligible for this post. Bhaskaran insisted that his brother was a model of honesty, truthfulness and justice. He has everything that an Indian leader should have.

KR Narayan was born on 27 October 1920 in a Dalit family of Uzhavoor, a village in Kerala. His family was from Parwan caste. The basic job of the family was to pluck coconuts. Narayan’s father Kocheril Raman was a well-known Ayurvedacharya. His elder sister Gauri was also knowledgeable in homeopath. The younger brother Bhaskaran was a teacher by profession. The financial condition of the family was not good. Despite this, his father understood the importance of education very well. He got Narayanan admitted in the primary school of Uzhavoor. Narayanan passed his matriculation examination from St. Mary’s High School in 1937. C. M. S. of Kottayam After graduating from school, he completed his English Honors from Travancore University. When he did his Masters in First Class in 1943, Narayanan was the first Dalit student to do so. No Dalit student had achieved this feat before.

Had to face casteism for the first time

Narayanan’s elder sister Gauri says that Narayanan escaped caste oppression as a child but faced caste discrimination for the first time after graduating from Travancore University. Narayanan had gone to meet the then Diwan CP Ramaswamy Iyer for a job. Iyer enraged and asked whether a Parvan (Dalit caste) should wear a silk mundu. He rejected Narayan outright. This left Narayanan completely disappointed. After that he came to Delhi. After coming to Delhi, he worked as a journalist for The Hindu and The Times of India from 1944 to 1945. KR Narayanan wanted to study abroad. At that time there was no such system of scholarship. In such a situation, he wrote a letter to the head of Tata Group, JRD Tata, seeking help. Tata helped him. In this way he could study at the London School of Economics. Here he studied Political Science. He also holds a BSc (Economic) Honors degree.

Received many honors at international level

KR Narayanan also wrote several books. Narayanan’s books include ‘India and America’s Essays in Understanding’, ‘Images and Insights’ and ‘Non-Alignment in Contemporary International Relations’. Narayanan also received many prizes at the national and international level. In 1998, he was given the ‘World Statesman Award’ by The Appeal of Conscience Foundation, New York. The University of Toledo, USA, awarded Narayan a doctorate. At the same time, the University of Australia honored Narayanan with the honor of ‘Doctor of Loss’. Narayanan also received a doctorate in Political Science from the University of San Carlos in Turkey. In the year 2005, Narayan’s health deteriorated significantly. His kidneys stopped working due to pneumonia. He breathed his last on 9 November 2005 at Army Research and Referral Hospital, Delhi.

Note: This news piece was originally published in navbharattimes.com and used purely for non-profit/non-commercial purposes exclusively for Human Rights. 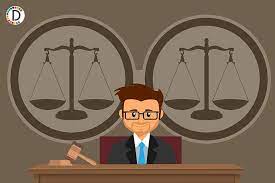 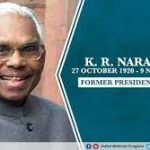