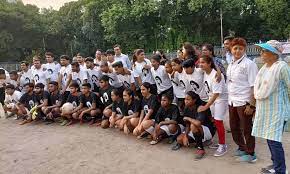 While an equal number of men and women players participated in both teams, another feature of the match was the referee, Suprava Roy, who belonged to the transgender community.

The Ramleela Maidan in Entally, Kolkata remains usually occupied in the evenings. It’s one of the crowdy hotspots in the city of joy that is either thronged by teens playing football and cricket, people pacing through its boundaries for evening walks, or sometimes by political parties for their gatherings.

On Friday evening, the Ramleela ground witnessed a unique football match that caught the audience’s attention. The city witnessed its first-ever mixed-gender football match. People were in awe to see a woman going for a sliding tackle to snatch the ball away from the opponent’s forward who was a male, while a male goalkeeper diving to save a shot taken by his female opponent.

As a run-up to the 11th All India DYFI conference, the mixed-gender football match was organised. It was one of the events as a precursor to the conference. The match was held between the Democratic Youth Federation of India (DYFI) and the Student’s Federation of India (SFI), two youth organisations active in the city. While both teams featured an equal number of men and women players, another unique element of the match was the referee, Suprava Roy, who belonged to the transgender community.

One of the teams in the mixed-gender football match (Source: Subhankar AVi Das/Facebook) The match saw the presence of the former captain of the Indian women’s football team Kuntala Ghosh Dastidar, India’s first Arjuna award-winning woman footballer Shanti Mullick and one of the leaders of the Gender Equality movement Saira Shah Halim.  Footballer Kuntala Ghoshdastidar told The Bridge, “I want to thank DYFI from the bottom of my heart for organising such a great event.

The biggest motivator in my life has been sports for all. It doesn’t matter who wins or loses, it was necessary to set an example. The biggest statement they set yesterday was by introducing a representative of the transgender community in sports. I remember how Bandana Pal’s life turned into a living hell for wanting to play football being a transperson. I want to see a change in this system.

Maybe, one day we will see more initiatives like this. I am always going to be beside them.” Shanti Mullick told, “It was quite innovative. I saw both the teams giving their all on the field. There should be more such instances like this.” The DYFI, ahead of its All-India conference is hosting a series of sporting events across West Bengal to inspire the youth to take up some physical game to keep themselves fit. On Saturday morning, they hosted a short marathon in the city

Note: This news piece was originally published in thebridge.com and used purely for non-profit/non-commercial purposes exclusively for Human Rights 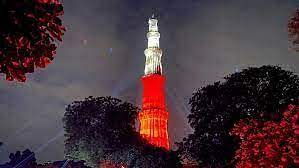 Book Extract: Muslims took the Qutub Minar with them 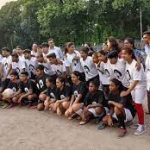