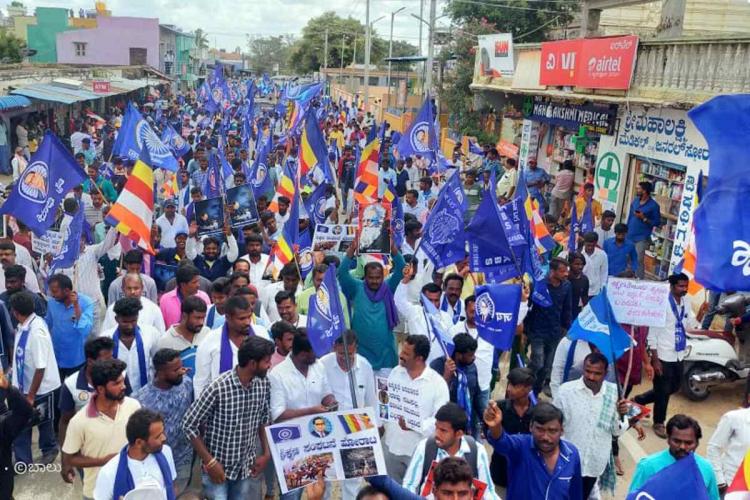 Days after a Dalit boy’s family was fined Rs 60,000 for the simple act of touching a pole attached to a Hindu deity’s idol, a massive protest was held on Sunday, September 25 by Dalit organisations in Kolar district of Karnataka. The protest, called Ullerahalli Chalo, saw thousands march from the Tekal railway station to Ullerahalli village in Malur taluk of Kolar, demanding that the state government take action against the casteist boycott and help the Dalit family that was discriminated.

“We entered the temple not because we intended to insult any religion, but to assert that we are humans first and that we have every right to enter the place,” Anand Siddhartha, the organiser of Ullerahalli Chalo protest in Kolar told TNM. “We are protesting to show those who are oppressing and discriminating against us that we are one. We want the perpetrators to be punished as per law and for the family to be given justice,” Anand said.

The protest was held after Chethan, a boy belonging to a Dalit family, was ostracised for touching a pole attached to the idol of the Ullerahalli village deity Bhoothamma during the village fair on September 8. The upper caste village elders – some of whom are also members of the village gram panchayat – accused Chethan of defiling the idol and fined him Rs 60,000. After the incident was reported to the police by Dalit organisations, a suo motu case was registered against the gram panchayat members and village elders by the Kolar police.

Speaking to TNM, Shobha, mother of the 15-year-old Chethan, said the family was asked to pay Rs 60,000 before October 1. “How can I pay so much? I earn Rs 300 as my wages for heavy labour. I asked them if I could pay at least Rs 5,000, but they refused. They (the villagers) beat my son up, humiliated us in front of everyone like we’re dirt. No God came to help us. Why should I worship a God who didn’t come to my aid? This is why I removed all the Hindu god’s idols from my home. Ambedkar is the one who fought for the rights of my people and these are the people who are helping me. If I have to worship anyone, it will be Ambedkar from now on,” she said.

Dalit organisations immediately rushed to help the family, after they became aware of the incident and it was after their intervention that a police complaint was filed. The bail application of the accused has been rejected. Shobha related how when she was asked to come to the court and speak, around 20 villagers approached her and tried to convince her to withdraw her complaint, while others threatened her with grave consequences, if she did not comply.

“The protest that happened on Sunday gave a sense of hope and courage to my family. We were comforted knowing that thousands stand with us. I can now ask for justice without fear,” Shobha said.

Among the many protesters was Nethravathi, who is with the Karnataka Mahila Daurjanya Virodhi Okkoota (Karnataka Women’s Coalition against Violence). “A few years ago, A Narayanaswamy, a Dalit MP from the BJP was also stopped from entering a temple (in Pavagada in Tumakuru). When a politician from a large party is not spared, one can only imagine the horrors faced by the common people. I know what Chethan has experienced. I have faced the same thing when I was younger for being a Dalit and a woman,” said Nethravathi said.

Members of several progressive organisations including the Dalit Sangharsh Samiti, Ambedkar Seva Samiti, Dalit Rights Committee, Prajaparivartan Vidya, Ambedkar Swabhimani Sene, Dalits and Minorities Sena joined the protest in Kolar. Anand Siddhartha said that they would follow in the footsteps of Ambedkar and educate families in Kolar to convert to Buddhism on October 14. “This is because we want a life of dignity and equality and this can be done only by getting out of the religion that strips us off of our humanity. Only through annihilation of caste can the future of this country be saved,” he said. October 14 is a significant date as it was on this day in 1956, that BR Ambedkar, along with 3.65 lakh supporters, converted to Buddhism in Nagpur to denounce the caste system.

The protest in Ullerahalli was modelled on the Chalo Una protests held in 2016. The Chalo Una protests were a landmark series of protests against the treatment of Dalits in response to cow vigilante violence in India. In particular, the protests were against the flogging incident from Una village in Gujarat, where a Dalit family was assaulted on the pretext of cow protection. An estimated 10,000 people led by lawyer and activist Jignesh Mevani, marched from Ahmedabad to Una village. This protest sparked similar protests in Udupi in 2016 in response to the murder of Praveen Poojary, a person belonging to a backward caste, who was killed after being suspected of transporting cows to a slaughterhouse.

Note: This news piece was originally published in thenewsminute.com and used purely for non-profit/non-commercial purposes exclusively for Human Rights . 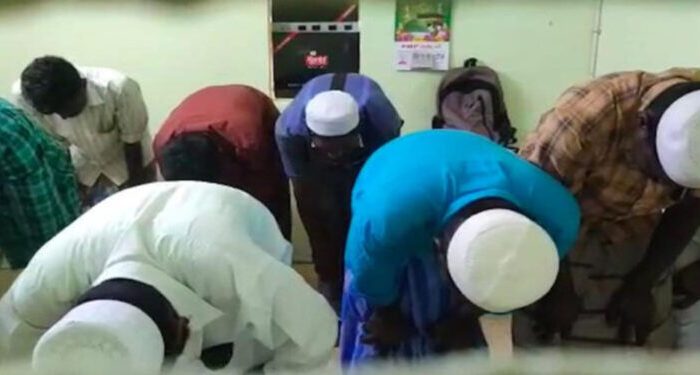 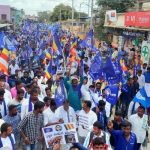