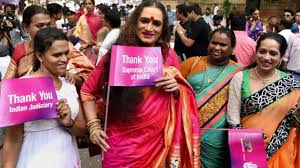 The recent news of a gay prince and 50 transgender people joining the ruling party turned out to be fake.

For two months, the Delhi High Court waited for India’s Central government to share their views on the recognition of same-sex marriage under the Hindu Marriage Act in India. But as was expected by several members of India’s LGBTQ+ community in India including me, the Centre last week replied through an affidavit, “Living together as partners and having sexual relationship by same sex individuals [which is decriminalised now] is not comparable with the Indian family unit concept of a husband, a wife and children which necessarily presuppose a biological man as a ‘husband’, a biological woman as a ‘wife’ and the children born out of the union between the two.” Classy. They did a similar thing during the IPC Section 377 hearing as well.

As far as I can see, India’s ruling party, the Bharatiya Janata Party (BJP), is not fond of queers. Yet at the same time, there is often media coverage where they are built up as queer saviours.

In late January 2021, the news of Prince Manvendra Singh Gohil—the royal prince of Rajpipla in India’s western state of Gujarat—joining India’s ruling party BJP broke out. It created quite a stir within the Indian queer community. Gohil had found international fame when he became the first openly gay royal figure from India, one who also got featured on Oprah. So the fact that someone like him could join the right-wing ruling party, Bharatiya Janata Party (BJP)—which has time and again been criticised for persecution of minorities—was disconcerting to me and others from the community, to say the least.

The news, however, turned out to be false. “I, along with members of the Lakshya Trust [an organisation focusing on gay issues and sexual health, run by Gohil], went to the event to congratulate Dr. Vijay Shah who recently became the President for BJP’s Vadodara chapter,” said Gohil, who runs a sanctuary for queer people in the state of Gujarat, prime minister Narendra Modi’s home state. “I went because to bring about change, you have to work with those in power. But the news that came out was absolutely untrue. I sent out a clarification too but only a couple of them bothered printing it.” And to add to that, the media also wrongly reported that 50 transgender individuals had joined the party (in some reports, the number is 100). Far from it, certain members of the community we spoke with have called BJP’s “support” as nothing more than a PR stunt for the recently held Municipal elections.

BJP Secretary at Vadodara city level, Komal Kukreja, is an advocate and someone who believes in transgender equality in society. “The event was a part of the Page Committee drive and I wanted to extend it to the transgender community in Vadodara as well, since they weren’t satisfied with the 2014 NALSA judgement and the 2019 Transgender Persons Bill,” she told VICE, refusing to comment on the fake news that went out post the event. A Page Committee is something that has been created by the BJP to register people who wish to have candidacy for the party. Once registered, these candidates have to get enough people to vote for them in their constituency. If they get the desired vote bank, they stand a chance to get the party ticket. But as Gohil confirmed, neither he nor 50 transgender individuals, officially joined the BJP as was widely reported.

This isn’t the first time news involving BJP and transgender rights has been misreported. Ever since the protests against the controversial Citizenship Amendment Act began in late 2019, a clear ideological rift within the Indian queer community has become rather evident. All of this is because when it comes to the BJP addressing queer rights, there have been several ups and downs. While BJP MP Subramanian Swamy has been called out for referring to homosexuality as a sickness, the Yogi Adityanath-led government in Uttar Pradesh (UP) has been lauded for building the first-ever transgender toilet facility in Varanasi as well as an entire metro station in Noida dedicated to transgender individuals.

But one man does not make up an entire government. The way some of the news regarding these initiatives are being reported, one might believe that Yogi Adityanath himself is working on the construction site at these ventures. With regards to the transgender university being built in UP’s Kushinagar district, the main people behind it are members of the Akhil Bhartiya Kinnar Siksha Seva Trust (All-India transgender education service trust). So while the government approves such projects, giving them full brownie points in the media is unfair.

Similarly, the Noida Metro Rail Corporation (NMRC) announced that they are renaming the Sector 50 metro station to “She Man”. This ended up creating further discomfort among the transgender community members who felt that it would further insult their identity.

Following this, the NMRC changed the name of the station to “Pride Station”.

However, credit where credit’s due, the Yogi-led government did make an amendment to the UP Revenue Code of 2006, following which transgender inviduals will get the right to inherit ancestral land. He’s definitely come a long way since he called LGBT people words like “ghatiya” (disgusting) and “unnatural” back in 2013.

Adhyasa Jeet, a transgender writer-activist, who was present at the event in Vadodara, feels that such occasions are an example of upper class cisgender men and women organising events for the marginalised community and appropriating their problems to use vote-bank politics. “Despite being allotted ten minutes to address the issues plaguing the community, I wasn’t given a chance [to speak]” she said.

However, Kukreja refuted that saying, “That wasn’t the right time or the setting.” It’s interesting to note that at an event dedicated to celebrate and address transgender rigths, no transgender indivudals got to speak up on the day, especially when the media was present.

Gohil feels that just as the Indian media took a while to get sensitised, our political leaders will also need some time to learn the correct way to address the issues and the terminologies to be used. “BJP is working towards creating job opportunities and educating transgender persons,” he told VICE. “It’s not going to happen overnight, My purpose is to keep following up with them. You have to work with the power that is in power. If we pick up a fight with them based on ideologies, it won’t work.”

Although the BJP government has been trying to be more inclusive of the transgender community, the reportage around such events is still extremely questionable, because they are essentially discounting the efforts of all the non-profits who are actually working tirelessly behind the scene. In all honesty, it is too soon to put the ruling party on a pedestal for doing the bare minimum of their civic duty towards the transgender community. Let’s also not forget that there are other states lagging way behind in the whole narrative. So until the Central government takes major steps benefiting the community, we shall have to hold our breath. 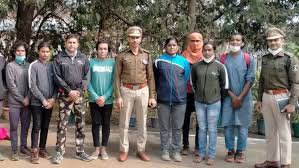 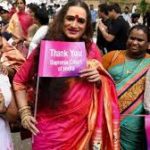