Kolkata: City transgenders are into an elaborate post-pandemic Durga Puja celebrations this year.

Their “Ardhanariswar” (half male-half female deity) found a permanent venue amid last year, at Gariama Greh on EM Bypass, the shelter home funded by the union ministry of social justice and empowerment for the LGBTQI community. “This time the fear of Covid is almost gone and everyone wants to believe the pandemic is nearing an end. In keeping with the spirits, it’s a bigger celebration this year. We are also praying to Goddess Durga to allow all trans and marginalized people to come out of the shackles of intimidation forever,” said Ranjita Sinha, secretary of transgender support group Gokhale Road Bandhan and Association of Transgender/Hijra Bengal.

Their puja turns five this year, and for the second time it will be organised outside the confines of Sinha’s apartment. “Since last year, Australian consulate general Rowan Ainsworth has been our chief guest. She will be here tomorrow as well, along with veteran danseuse-choreographer-social activist Alokananda Roy, filmmaker Sudeshna Roy and others for the inauguration,” Sinha said.

Puja of their unique idol, a fusion of Shiva and Durga, has already started because of Navratri. The idol has been made by a trans person with guidance from Kumartuli artist Biswanath Pal. “Imagine such a deity coming alive in the hands of my transmen brothers who were born women but have opted for manhood by choice. This is our way of defying patriarchy,” Sinha said.

They have been worshipping the same idol for last four years. But this year a new idol will be installed alongside the existing one. 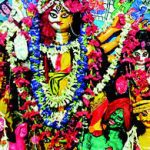