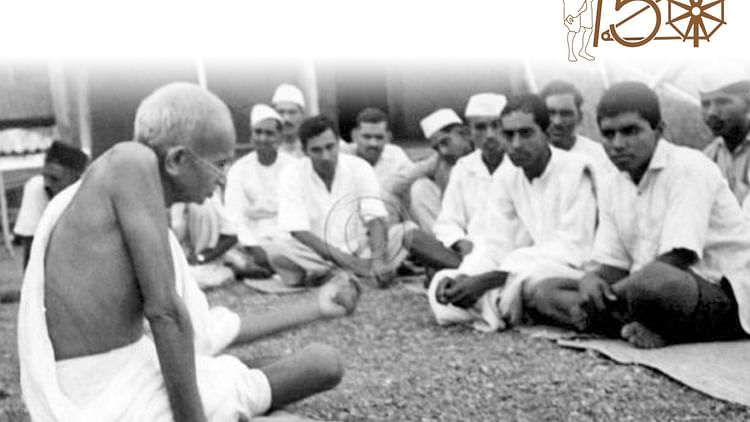 A year before Ambedkar wrote ‘Annihilation of Caste’ in1936, Gandhi wrote in Harijan that ‘Caste Has to Go’

Ambedkar seldom took note of it; ‘Dalits’ today do not celebrate it; and Gandhi biographers pass over it in a few paragraphs. Yet, there is nothing in the annals of Indian history to which it can be compared. Untouchability was one of Gandhi’s central concerns. In both words and actions, Gandhi attacked untouchability in ways that were radical for a ‘caste Hindu’. Despite being a ‘caste Hindu’, Gandhi identified himself with the ‘Untouchables’.

He said in 1934, “as a savarna Hindu, when I see that there are some Hindus called avarnas, it offends my sense of justice and truth,” and “if I discover that Hindu shastras really countenance untouchability as it is seen today, I will renounce and denounce Hinduism.” As early as 1915, he had said, “if it were proved to me that [untouchability] is an essential part of Hinduism, I for one would declare myself an open rebel against Hinduism itself.” “This religion,” he had said in 1917, “if it can be called such, stinks in my nostrils. This certainly cannot be the Hindu religion.” These were strong words, but the passion behind them sprang from Gandhi’s soul’s agony. To live with untouchability, Gandhi said, was “like a cup of poison” to him.

The critics of Gandhi by focusing on a ‘selective’ reading of some of Gandhi’s ‘early’ writings reach a conclusion that Gandhi never decisively renounced his belief in ‘chaturvarna’ or the system of four varnas. They rest their understanding of Gandhi’s concern with caste based on these writings and ignore his ‘practice’, which were a clear denunciation of untouchability and caste prejudices.

Gandhi, in his personal life rejected untouchability from the very beginning and relentlessly made efforts to eradicate it. As early as 1905, Gandhi had held that the Brahmins and the ‘Untouchables’ were equal in his eyes. He would insist on his own family circle that no one should consider work done by a scavenger as “polluting.” In 1909, he was publicly rejecting the notion that there were “high” and “low” castes.

Significantly, Gandhi worked for the ending of the caste system itself, which was responsible for the caste and other socio-economic disabilities of the ‘Untouchables’. He looked for the most effective, quickest and the most inoffensive way to destroy caste. In his effort to abolish the caste system, Gandhi followed his usual ‘strategy’ of looking for the critical and also the weakest link in the chain. Light was thrown on Gandhi’s thinking on caste and untouchability by Jawaharlal Nehru: “I asked [Gandhi] repeatedly: Why don’t you hit out at the caste system directly?

Gandhi’s beliefs on untouchability were backed by the force of a lifetime of action. At the age of twelve, in 1881, Gandhi had disregarded his mother’s warnings to not touch Uka, an ‘Untouchable’, who used to clean latrines in their house. Gandhi had then challenged his mother that Hindu religion did not sanction untouchability.

At age eighteen, Gandhi defied caste restrictions to go abroad. Gandhi was ostracised for this act but he refused to perform penance. This strength of mind remained with Gandhi even in South Africa (1893-1914) where he allowed persons of all communities, religions, races and castes, including the ‘Untouchables’, to stay in his house like members of his family.

Once when Kasturba showed reluctance, and was reticent, about cleaning the urine pot of one such member of his ‘family’, Gandhi had threatened to evict her from the house. Gandhi would invariably eat with people of different faiths and castes, including the ‘Untouchables’. Gandhi berated as cowardly the satyagrahis in South African prisons who would not eat food touched by their ‘Untouchable’ brethren or sleep near them in jails.

He told the Tamils in a meeting in South Africa that they had come to South Africa in vain if they brought with them the caste divisions from Madras. After returning to India in 1915, Gandhi had an ‘Untouchable’ family reside in his Satyagraha Ashram, Ahmedabad, Gujarat. He immediately faced the anger of the Vaishnavs of Ahmedabad who stopped all monetary help to the ashram. Following this, Gandhi decided to relocate his ashram to the ‘Untouchables’’ quarters in Ahmedabad.

Starting with his grandfather, Gandhi states, his family had not been pursuing their hereditary duty over the last three generations that was assigned to them. He himself never earned his bread and butter by following his ancestors’ calling. He also allowed his children to choose their own professions, and never pressed them to follow any pursuit prescribed for their caste. Not only did he allow his son Ramdas to marry someone who was from a different sub-caste but also allowed his other son Devadas to marry a girl who was from another varna altogether. Gandhi also married off his adopted daughter Lakshmi, who was an ‘Untouchable, to a Brahmin boy.

Moreover, Gandhi tried to master many activities that were prohibited for his caste. He himself worked as a scavenger, a barber, a washerman, a cobbler, a tiller and a tailor – all ‘unclean’ works. He even forced his family to break pollution taboos by engaging them in shoemaking, leatherwork, cleaning of toilets – works profoundly ‘polluting’ to the ‘caste Hindus’. In fact, cleaning toilets persisted all his life. None of Gandhi’s ashrams were built on the basic principle of the caste system or varnashrama dharma; and none of the caste restrictions were observed in his ashrams.

In Hind Swaraj (1909), Gandhi had argued that Independence, if it was not accompanied by a deep change in social priorities, would be pointless. From the time of his return to India in 1915, Gandhi combined political activity with social reform. He pushed the removal of untouchability to the forefront as early as 1920 at the Nagpur session of the Congress that adopted the non-co-operation resolution. Gandhi declared that the removal of untouchability was an essential condition for his concept of Swaraj.

For Gandhi, Swaraj was not only expulsion of the British from India but also the liberation of society from slavery. According to him, attainment of political freedom was inadequate without social freedom for the ‘Untouchables’. Shortly after he returned to India in 1915, Gandhi became conscious of the problem of the colonial state using caste to weaken the national movement. He was also concerned that the orthodox Hindus should not be alienated to a point where they would break from the nationalist platform.

The British criticised Gandhi for pursuing politics to serve narrow interests rather than take to social reform that would benefit millions. They repeatedly warned Gandhi that “even if you succeed in establishing Indian Independence tomorrow,” it would be “wrecked and broken to pieces on the rock of caste.” The British further asked: “Should not […] the Hindus wash [their] blood-stained hands before [they] ask the English to wash theirs?”

At the same time, Gandhi understood that the conservative, but, articulate and powerful section of Hindus, was not yet ready for radical reforms. Gandhi’s realisation came close to reality when in 1920, the orthodox Hindus warned him that unless the ‘Untouchables’ were excluded from the national schools they would support the British Raj. According to Gandhi, the participation of the ‘caste Hindus’ was necessary both for the effectiveness of the non-violent mass political movement for freedom from colonial rule and for the success of the movement against untouchability. For him, not keeping in mind the sentiments of the majority of the orthodox Hindus would have been suicidal.

As a result, in the early years of his initiation into the national movement, Gandhi frequently insisted on being a sanatani Hindu and even seemed to defend both caste and varna. Gandhi would repeatedly assert that he “will sacrifice this life itself to uphold the sanatana dharma.” But it is important to note that simultaneously, he defined sanatana dharma to be one that did not teach him to disrespect or despise the ‘Untouchables’.

On November 27, 1927, Gandhi openly declared that “if varnashrama goes to the dogs in the removal of untouchability, I shall not shed a tear.” By April 1933, Gandhi progressed further in his anti-untouchability drive by asserting that “varna could not be perpetuated or determined merely by birth,” because, for him, a combination of natural qualities and natural aptitudes determined one’s caste, not birth or heredity.

Thus, in one stroke Gandhi rejected the essence of the varna or the caste system by asserting that it was not determined by birth or heredity. By 1935, when Ambedkar was strongly criticising Gandhi’s views on untouchability, Gandhi’s final position was that caste had to go. In fact, Gandhi had given up defending caste even before Ambedkar had got Annihilation of Caste published in 1936.

Gandhi gave the title Caste Has To Go to his November 16, 1935 article published in Harijan, way before Ambedkar’s Annihilation of Caste came out. Gandhi was also emphasising that “the sooner public opinion abolishes [caste], the better.” Gandhi became more “sensitive” to the “structural roots” of caste discrimination when he was at the height of his prominence.

In his 1936 debate with Ambedkar, Gandhi reiterated his rejection of caste, and said that it was “harmful both to the spiritual and to the national growth.” Gandhi even openly affirmed his acceptance of, and advocated for, inter-caste dining and marriages. Gandhi’s views, once expressed freely, culminated in the announcement by 1946 that in his Sevagram Ashram, couples could marry only on the condition that one party was a ‘Harijan’.

Gandhi, until 1920, tried to destroy the notion that physical contact with the ‘Untouchables’ ‘polluted’ a Hindu from a higher caste. From 1921-27, he began to demand the entry of the ‘Untouchable’ children into public schools. Gandhi’s strong public reputation at the peak of the Civil Disobedience Movement enabled him to demand that the ‘caste Hindus’ must do ‘penance’ and ‘make reparations’ to the ‘Untouchables’.

From 1927 to 1932, he took up evidently the most contentious issue demanding from the ‘caste Hindus’ that the ‘Untouchables’ must have the same rights of entry in all the temples as the other Hindus. In 1925, Gandhi supported it by backing the use of Satyagraha against a denial of the use of public roads adjacent to a temple and Brahmin residences in Vaikom. He personally went to Vaikom, Kerala, to debate with the orthodox Brahmins against their interpretation of the scriptures, and, managed to get the road next to the temple opened to all.

In 1932, he went to the extent of undertaking a “fast unto death” over the question of opening the Guruvayur Temple, Malabar, for the ‘Untouchables’. With this, Gandhi moved from being a cautious reformer to attaining a bolder, albeit revolutionary, position on untouchability. Gandhi’s approach and method were brilliantly understood by the atheist Indian social reformer, G. Ramachandra Rao, popularly known as ‘Gora’, who dialogued with Gandhi in the 1940s. Gora wrote on Gandhi’s approach thus:

“When [Gandhi] first undertook to remove untouchability, the problem of varna dharma was also there. It was easy to see intellectually, even then, that caste ought to go root and branch if untouchability was to be completely eradicated. But as a practical proposition, caste was not the immediate problem then. The problem was only the removal of untouchability. So, he allowed caste to continue, though personally he observed no caste even then.” Gandhi’s goal of equality remained the same throughout, though the manner in which it was sought to be executed differed responding to the changing ‘context’ over time and also of space as seen in the case of South Africa and India.

So much inhuman treatment to fellow humans just shows how evolved the goondas are. I am very sad to see such animals exist in the 21st century. 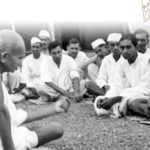