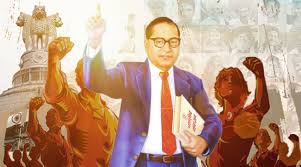 Great Dr Bhimrao Ramji Ambedkar was not only the maker of the Indian Constitution but was also the visionary architect of India’s labor law reforms. He was the savior of the Indian labor, and not a mere Dalit leader. Many of the important labor law initiatives in India were made by Dr Ambedkar himself, being the first Labor Minister of India in the Viceroy’s Executive Council during the four years from 1942 to 1946. Those four years can be termed as the golden period of Indian labor.

After completing his studies with flying colors from Columbia University and London School of Economics, he returned to India and became Professor and Principal of the Government Law College in Bombay. But for ten years the ‘untouchable’ Barrister and Professor could not get sufficient place to reside and had to live in one of the ‘chawls’ of Bombay Development Department at Parel meant for the lowest level of workers.

Each floor was having a single lavatory and single tap for bathing, washing and cleaning cooking utensils. Most of the tenants were mill workers. Living under these conditions, the professor acquired a first-hand experience about the hardships in the lives of the workers. He had occasions to visit some of the mills and see how the workers were working there. This has created a passion in him to work for the welfare of workers. He thus gained the confidence of many workers and rose to their leadership. This life experience created the background for him to become India’s architect of labor law reforms.

As a Labor and Political Leader

In August 1936, he founded a new political party called the Independent Labor Party. He drafted an action program to address the grievances of the landless, poor tenants, farmers and workers. In the initial election itself, fifteen out of seventeen candidates put up by the party succeeded including Dr Ambedkar. He got established as a reputed labor leader.

In 1938, the Congress Government presented the Industrial Disputes Bill with many anti-worker clauses in the Bombay Legislative Assembly. Dr Ambedkar accused the bill as “bad, bloody and bloodthirsty” since it restricted the right of the laborer to strike and made the strike illegal as well as impossible.

The bill also enabled the employer not to disclose his budget and sought to use police force against the workers. Still, the Congress Government went forward with the bill. As a part of the campaign against the law, a one day strike was also held.

Dr Ambedkar took over the Labor portfolio as the Labor Member of the Viceroy’s Executive Council in 1942. In a reception, he said in humility that the high office held no charm for him and that he would be the first to quit if his efforts as Labor Member were unsuccessful in improving the conditions of workers of the country. Regarding the Government’s commitment to labor, Dr Ambedkar based his views on the recommendations of the Royal Commission, 1930 and the various Conventions of the International Labor Organization (ILO).

Dr Ambedkar was the Champion of real tripartism in India. In 1942, he called the 4th Tripartite Indian Labor Conference (ILC) in New Delhi. Before that, only the Government representatives were there in the ILC. In his address, Dr Ambedkar said: “It is for the first time in the history of these labor conferences that the representatives of the employers and employees have been brought face to face within the ambit of a joint conference”.

The objects of the ILC 1942 were the formulating of a procedure for the settlement of industrial disputes and the discussion of matters of all-India importance as between Labor and Capital. Joint discussions in the ILCs brought fundamental changes in the outlook of the Government, employers and employees on labor issues.

Initiatives on Labor Rights and Welfare

Dr Ambedkar for the first time brought in the 8-hour working per day to India, bringing it down from 14 hours. He brought it in the 4th session of Indian Labor Conference held in New Delhi in 1942. He proposed holidays with pay for factory workers. He followed the English pattern of working hours of 48 hours per week in India.

For fixing minimum wages for labor, Dr Ambedkar drafted the ‘Minimum Wages Act’ in 1942 though it was enacted into law in 1948. Dr Ambedkar moved the Payment of Wages (Amendment) Bill in1944. ‘Dearness Allowance’ (DA), ‘Leave Benefit’, ‘Revision of Scale of Pay’, extra payment for Overtime, subsidized food etc. are the contributions of Dr Ambedkar.

Dr Babasaheb Ambedkar formed an Advisory Committee to advise on matters arising out of the Labor Welfare under B. P. Agarkar. As a labor Minister, he invited Mr V.V. Giri, the then president of the AITUC, to head the commission on ‘Forced labor’. Among East Asian countries, India was the first nation to bring insurance for the well-being of employees through the Employees State Insurance (ESI) Act.

The first document on social insurance was ‘Report on Health Insurance’ submitted to the ILC of 1942. Dr Ambedkar has contributed the ‘Coal and Mica Mines Provident Fund’ and the ‘Mica Mines Labor Welfare Fund, 1946’. He has also contributed to the making of Employees Provident Fund Law. He brought an amendment to the Workmen’s Compensation Act of 1923. In 1944, Dr Ambedkar initiated the amendment to the Factories Act of 1934 with several modifications. It was Ambedkar again,who introduced canteen and medical facilities inside the factory etc.

Before coal mines maternity law was presented, Dr Ambedkar, as a Labor Member, went to the coalfields in Dhanbad to study the working conditions. He inspected both surface and underground conditions of work and went 400 feet underground.

It is because of Dr Babasaheb Ambedkar that workers can go on strike for their rights. In 1943, Dr Ambedkar introduced the ‘Indian Trade Unions (Amendment) Bill’ for compulsory recognition of trade unions. The Industrial Disputes Act, which is the basic labor law of the country, was passed in 1947 and ESI Act passed in 1948; but were introduced in the Viceroy’s Council by Dr Ambedkar years back.

Ambedkar was instrumental in the establishment of the Reserve Bank of India in 1935. His ‘Industrial Statistical Act, 1942’ was enacted for assessing labor statistics in the matters of labor disputes, wage rates, income, inflation, debt, housing, employment, deposits and other funds.

Dr Ambedkar took steps to amend the Maternity Benefit Act. When the maternity benefit bill was introduced in the House, he said: “I believe that it is in the interest of the nation that the mother ought to get a certain amount of rest during the prenatal period and also subsequently, and this Bill is based entirely on that principle.” He advocated for equal pay for equal work, and he got success in the field of coal mines.

Ambedkar was a pioneer in India’s skill development initiatives. He was instrumental in setting up the best Technical Training Scheme for Workers in India. On August 24, 1944 while in Calcutta he said: “This is the age of the Machine and it is only those countries in which technical and scientific training has risen to the highest pitch that will survive in the struggle…….The Technical Training Scheme not only maintained but extended all over the country and became a permanent part of the country’s educational system”. The current draft New Educational Policy also gives thrust to vocational education.

Dr Ambedkar has shown his brilliance by including Philosophy of social justice and labor rights in the Constitution. Dr Ambedkar wanted the subject of labor to be in the Union list as he stressed the need for uniformity of labor laws. But it could not be achieved.

A Strong Critic of Communism

Dr Ambedkar was amazed by the sight of equality between different castes in an RSS camp in Pune. On the other hand, he was a staunch critic of Communism. He said “I am the number one enemy to both Communism and Communists who exploited the laborers for their political ends”. He said class conflict is the cause of misery. He opposed Marxism with Buddhist ideas.

Dr Ambedkar said human beings are not living for bread alone; they have a heart. He said hatred and struggle could not be the basis of any change. Thus, he opposed Marxism. The Communist Party of India, becoming angry with his sharp criticism of Communism, declared that Ambedkar is an enemy of laborers. They attacked him as the ‘divider of the working class’, ‘misleader of Dalit masses’, ‘opponent of the nationalist movement’ and a ‘stooge of imperialists’. CPI founding member S.A. Dange appealed to voters: “Spoil your votes but don’t vote Dr Ambedkar”.

Later, as usual, Communists took a U-turn and claimed Ambedkar was a proponent of class struggle. During his last days, when both Congress and Communists rejected Ambedkar and opposed him, his solace was RSS workers, which is described in Dattopant Thengdiji’s book on Dr Ambedkar. Thengdiji explains the circumstances in which he himself being an RSS pracharak became the election agent of Ambedkar in his last contesting of the election.

He cautioned that without social and economic freedom of all, there will not be any meaning of political freedom. Dr Ambedkar declared: “Labor is not content with securing merely fair conditions of work. What labor wants is fair conditions of life.” He criticized those who use the word “cheap labor” and pointed out that it is a shame to the industry as well: “It had been said that India’s monopoly was based on cheap labor. If this was true, it was not a matter of complement either to the industry or to labor.”

This was an answer to all those who at that time propagated that industrial progress at a cheap labor cost is the national goal. It is relevant even today.

Note: This news piece was originally published in newsbharati.com and used purely for non-profit/non-commercial purposes exclusively for Human Rights . 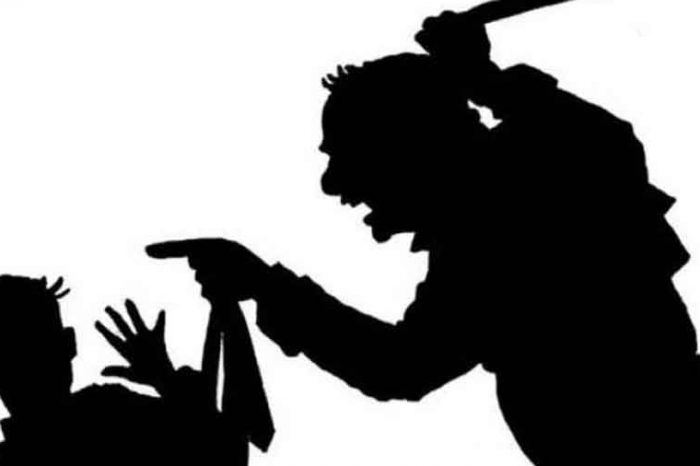 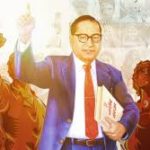