Distraught over financial troubles, the hapless widow of a Gulf migrant worker, who allegedly died by suicide in Sharjah, United Arab Emirates, over a month ago, knocked the doors of the Jagtial district administration along with her three children seeking financial support to surmount economic hardships.

The death by “suicide” of the Gulf migrant worker B Rajanarsaiah, 45, of Kondapur village in Velgatoor mandal, due to financial problems in Sharjah in the last week of May this year left his wife Jamuna, two daughters and a son devastated in their native place.

Unable to cope with the sudden death of their sole breadwinner and make their ends meet, the family members of the deceased Gulf migrant worker submitted a memorandum to the district authorities during Prajavani, the weekly grievance redressal meeting, held at the Collectorate in Jagtial on Monday, sources said.

Narrating their financial woes, the hapless members of the poor Dalit family made a fervent appeal to the district administration to sanction ₹10 lakh financial assistance under the Dalit Bandhu scheme or three acres of agricultural land or at least ₹5 lakh ex-gratia to their family.

The State government should immediately sanction Rs 5 lakh ex-gratia to each family of the deceased Gulf migrant workers to provide succour to them. 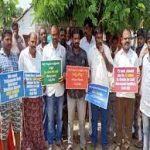