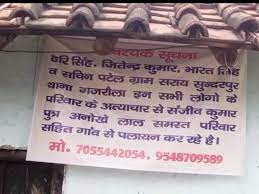 In Pilibhit, a Dalit family, troubled by the bullies of the village, has put up a poster outside the house, writing about having fled. As soon as the matter came to light, there was a stir in the administrative department. The police officers who reached the spot in a hurried manner made a settlement between the two sides.

Sandeep Kumar, a resident of Sarai Sunderpur village under Gajraula police station area, said that there is a dispute going on with Hari Singh, Jitendra, Bharat Singh Paksha, residents of the village. On September 13, his father Anokhilal was returning after a ferry. During this, the bullies stopped them on the way and abused and assaulted them.

dissatisfaction with not taking action
Dabangs also uttered caste-indicative words. In the whole case, the aggrieved party filed a complaint in the police station and sought justice. When the police did not take any action, late on Monday night, Sanjeev pasted the poster saying that he had fled outside his house.

There was a stir after pasting the poster
As soon as the matter of pasting posters saying that the Dalit family had migrated came to the notice of the police officials, the local police along with the higher officials reached the spot. The officials negotiated a settlement between the two sides. The police went back after the dispute over the road between the two sides was settled.

One party appealed in court
Gajraula Police Station President Ashutosh Raghuvanshi has told that there was a dispute going on between the two parties regarding the route. A mutual agreement has already been reached between the two parties. Meanwhile, one party had filed a suit in the court, on which the other side got angry and said to flee. At present, a settlement has been reached between the Dalit family and the other family.

poster for the second time
This is not the first time that a poster of exodus has been put up by a Dalit family in the district. Even before this, the Dalit family, upset due to non-action by the police, had put up posters outside the house saying that they had migrated to Bisalpur area and the family had also fled.

Note: This news piece was originally published in granthshala.in and used purely for non-profit/non-commercial purposes exclusively for Human Rights . 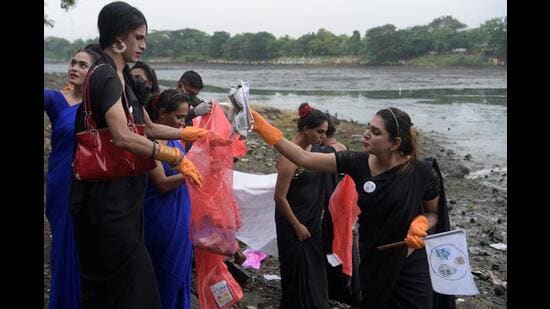 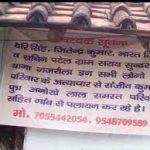