Charanjit Singh Channi is a member of the Ramdasia community, and among a handful of Dalits who have served as chief ministers

Charanjit Singh Channi became the first Dalit chief minister of Punjab on Monday a day after the ruling Congress nominated him for the post. A member of the Ramdasia community, he is among a handful of Dalits who have served as chief ministers:

— Bhola Paswan Shastri, a freedom fighter, served as Bihar’s chief minister from 1968 to 1971. He was also the first Dalit to be elected as the state’s top official.

— Mayawati, the Bahujan Samaj Party chief, a Dalit, has served as Uttar Pradesh chief minister four times. She is also the lone woman member of the community to have held the post.

— Congress leader Sushilkumar Shinde, a Dalit, has served as the Maharashtra chief minister as well as a Union minister. 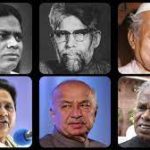