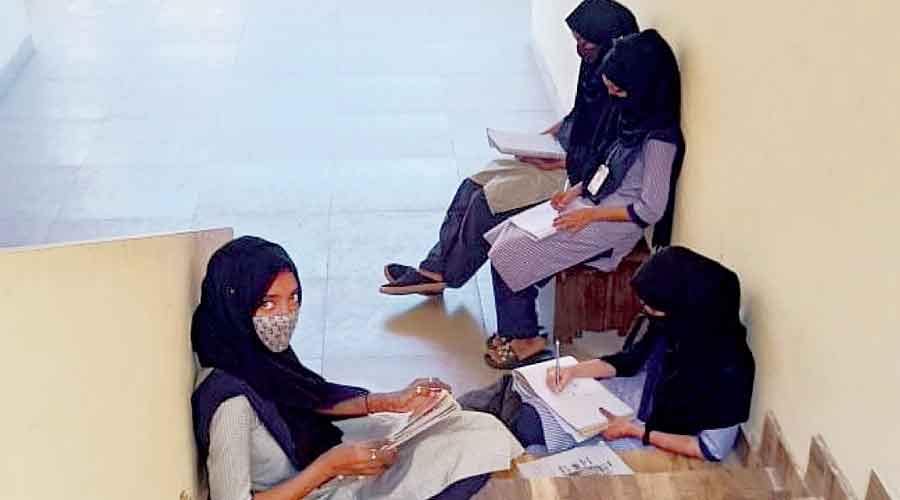 Bangalore, The rigid stand of a government college in Udupi against hijab has forced eight Muslim students to stay out of their classes for more than three weeks.

Initially, six girls of Government Pre-University College in Udupi had insisted on wearing their religious headscarf in classes. Two of their classmates joined them later.

However, the college authorities remained adamant about denying entry to students wearing hijab to classes.

The matter came to light on December 31 when the hijab-clad girls were allowed entry only to the campus but not the classrooms. Three weeks later, they are still spending their class hours in the corridors copying notes from their classmates.

“We have been going to our college each day with the hope that we would be allowed to attend classes, but end up spending the day on the campus trying to collect notes from our friends,” one of the eight students, who declined to be named, narrated the plight to The Telegraph on Tuesday

“We are only requesting permission to wear hijab, which is an emotion, our identity and our fundamental right,” said the student who spoke on behalf of the entire group.

“The science stream students are also missing their practical classes, which will affect their overall marks. I hope the college will understand this,” she added.

College principal Rudre Gowda who justified the decision told this newspaper that headscarves would make it difficult to identify the students. “How do we identify our students if some of them cover their heads?”

On what he thought about masks in the times of Covid-19, Gowda said: “Please don’t compare masks and hijab. A mask is different from a hijab. It is already difficult to identify people with the masks on. How do we know if they are girls, or even boys (in disguise), if they wear masks and have their heads covered?”

He dismissed allegations of religious bias against Muslim students. “Our students come from all religions and we don’t discriminate anyone,” he said, adding that the 1,000-strong student community comprises a hundred Muslim students and only eight of them are insisting on wearing hijab.

“All we are asking is for the girls to remove their headscarves before the class bell at 9.30am and wear them after the end of classes at 4pm,” Gowda said.

A parent-teacher meeting held on January 10 had solved a similar row in Government First Grade College in Koppa, Chikmagalur, about 100km away. Soon after news about the Udupi college episode broke, a group of Hindu students had appeared at the Koppa college wearing saffron scarves.

While they refused to yield until the management stopped Muslim girls from wearing hijab, the parent-teacher meeting solved the issue with none of the Hindu parents supporting their wards’ demands to don saffron scarves. The meeting decided to allow Muslim girls to wear hijab as long as they didn’t pin the head cover or tie them around their head.

Ansar Ahmed, Udupi district president of Karnataka Rakshana Vedike, a voluntary organisation that has become a prominent voice of Kannada language and culture of Karnataka, blamed the college authorities for the girls’ plight.

“The situation has sadly worsened due to the stubbornness of the college and its principal. The girls have been telling them they just need to wear the shawl part of the uniform to cover their heads and don’t need a separate hijab of a different colour or material. Yet the college is unrelenting,” Ahmed told this newspaper.

The All India Lawyers’ Association for Justice, a Bangalore-based body of legal professionals and law students, has written to the director of the department of pre-university education, complaining about the ill-treatment of the hijab-wearing students of the Udupi college.

In its complaint, the association noted that various court judgments had emphasised on the freedom to wear what anyone wanted and cited a Kerala High Court ruling against the ban on hijab in the Amnah Bint Basheer versus Central Board of Secondary Education case, stating “the right of women to have the choice of dress based on religions injunctions is a fundamental right protected under Article 25(1) when such prescription of dress is an essential part of the religion”.

The body urged the PU Board to institute an inquiry in the incident and take action against erring teachers and the principal.

Note: This news piece was originally published in thetelegraph.com and used purely for non-profit/non-commercial purposes exclusively for Human Rights objectives. 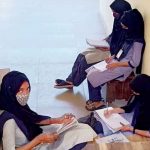