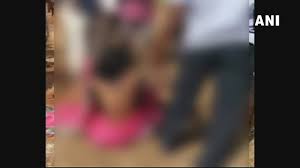 In the dispute of pouring water in the fields in the village Machua of Aligarh, Uttar Pradesh, a fight broke out between the two parties. It is alleged that after the quarrel, the people of the dominant side assaulted the Scheduled Caste people, fired and made a woman naked. A case has been registered against the accused people at the Harduaganj police station on behalf of the victim.

On the other hand, politics has also started regarding this case. People from some political parties have also started coming to the victim’s family.

Dev Prakash, a Scheduled Caste resident of Machua village, has said in a complaint to the police that when his nephews Luv Kush and Lokesh were watering their fields from the government drain of the canal. During this, the strongman Vinay of the Thakur caste of the village, his son, Vinay’s father all brought shovel, stick, rifle in their hands and started cutting the water of the canal. When this was opposed, they started beating, firing and insulting them with caste-related words.

Hearing the screams, Luv Kush’s father Ram Prasad and his wife Asha Devi reached the spot, then Vinay stripped his sister-in-law Asha by grabbing her leg and stripping her. After that he left from there threatening. The police has registered a case on the complaint of Dev Prakash.

Asha Devi, the victim in the case, told that

He further said that when we saved our children, we said that we will kill them. Asha Devi has accused the domineering Vinay, Komal and Manveer of the area.

Dev Prakash, the brother-in-law of the victim, told that when we went to cut water in the morning, Bilu was not allowed to cut water from the canal. During this, he directly attacked us with a shovel and then brought more people from his house. He brought his brother Komal and son Tanu, his father Manveer Singh and beat him up. After that Vinay again brought out the rifle and fired straight away, the fire was missed.

They threatened us and said that they will kill you. Along with sister-in-law were asking to kill my children. The sister-in-law told them with folded hands that do not kill our children, then dragged them naked and pushed them into the paddy field. ….Dev Prakash, brother-in-law of the victim

While talking to the media, Mahendra Singh said that today I am standing in this village Machua, the victim’s family belongs to the Scheduled Castes, atrocities have happened with them. As they told, 2 children are admitted in their medical, they have suffered a lot and the mothers, sisters, daughters of this family have also told their ordeal.

It seems that this is an inhuman act, unconstitutional, anti-social. If you speak of your rights, he spoke of water on his bar. He said that our field will dry up, we will not get water. It is so bad that what has happened to them is not right, it is condemnable.

At the same time, the leaders of the Samajwadi Party raised questions on the performance of the current government and talked about providing justice to the victim’s family.

On this matter, Aligarh Superintendent of Police, Rural Palash Bansal said that on July 26, information was received from village Machua of Harduaganj police station. There was a dispute between the two parties regarding irrigation water. Due to the dispute, 2 people of one side have suffered head injuries, who have been admitted to the district hospital. A case has been registered in the police station under appropriate sections. Two teams are engaged.

Note: This news piece was originally published in thequint.com and used purely for non-profit/non-commercial purposes exclusively for Human Rights. 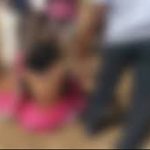