Ahmedabad: At least four persons were injured when members of the Thakor community on Thursday allegedly attacked the wedding procession of a Dalit woman at Dangarva village in Ahmedabad district. Ahmedabad rural police registered a case under the Atrocities Act and Section 323 (causing hurt) of the IPC. Virendra Yadav, Ahmedabad (rural) superintendent of police, said senior officials rushed to the spot after the attack and spoke to both communities. Based on the complaint, police arrested some members of the Thakore community for the offence.

“As the procession reached the Thakorvaas of the village, stones were pelted and people armed with sticks and other weapons attacked the procession,” said Siddharth Parmar, vice-president of Rashtriya Dalit Manch.

Jigar Parmar, the father of the bride, said that the village had passed a resolution banning wedding processions on horses, so his daughter and other family members had walked, accompanied by the DJ playing music, but members of the Thakor community still attacked the procession. The wedding then took place under police protection. The state police control room in a statement said there had been an argument between members of Thakor community and the Dalit family over the DJ playing music, which led to a clash in which four or five persons were injured. 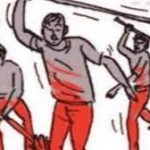